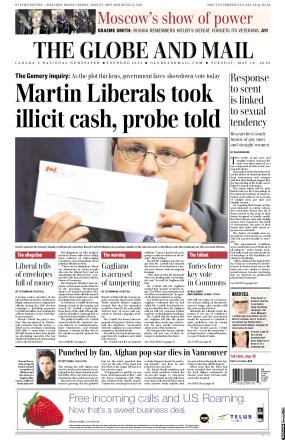 The federal government waded into uncharted constitutional waters Tuesday night after the Liberals were narrowly defeated in a vote the Conservatives say should topple the fragile minority government, but Prime Minister Paul Martin says he will ignore.

A coalition of 153 Conservative and Bloc Quebecois MPs voted for a motion questioning the governmentÃ¢€™s authority while 129 Liberals, 19 New Democrats and two Independents voted against the motion.

Immediately upon winning the vote, Conservative Leader Stephen Harper rose in the House of Commons to challenge Martin to immediately call a full-fledged vote of confidence, a vote the Liberals were sure to lose again if he did.

Ã¢€œThis is a corrupt party which is in the process of ruining the countryÃ¢€™s finances and which is now ignoring the democratically expressed will of the House of Commons. This government does not have the moral authority to govern this country,Ã¢€ Harper said outside the House.

Ã¢€œThis doesnÃ¢€™t mean there isnÃ¢€™t going to be another opportunity,Ã¢€ Martin responded. Ã¢€œThere will be a budget vote and there will be opposition days before the end of the month.Ã¢€
Bloc Quebecois Leader Gilles Duceppe vowed to find a way to bring down the government, but, like Harper, gave no hint about his plans. Ã¢€œWe wonÃ¢€™t wait for them. We will keep on finding ways to finish with this government.Ã¢€

Reaction
Stephen Taylor liveblogged the vote and grades the media.

Conservative MP Monte Solberg liveblogged from the House of Commons, via blackberry.

Ed Morrissey is going to know more about Canadian parliamentary procedure than most Canadians do, by the time this whole fiasco is over.

Rempelia Prime – “If the government cannot defeat a motion which explicity states, Ã¢€œthe House no longer has confidence in this government,Ã¢€ then on what authority does it continue to govern?”

update
An opinion by Andrew Heard, Associate Professor Political Science Dept., Simon Fraser University; “In light of the past precedents, and especially the relevance of the 1926 motions on the Customs Affair, the current motion appears to be clearly a vote of confidence which would require the government to resign or call an election in the event it loses the vote.”