David Petraeus says he supports the President's Afghanistan policy, including the withdrawal timetable, but that means less than most people think it does. 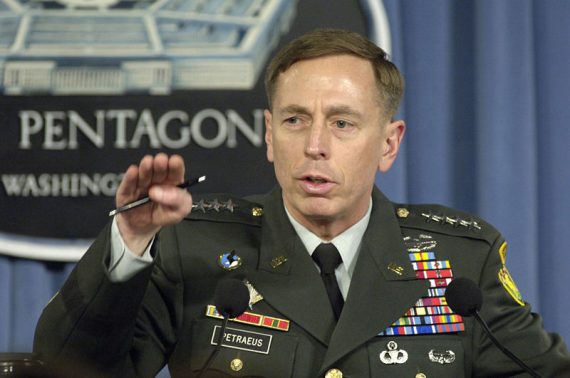 Just in case there was any doubt where General Petraeus stood on the July 2011 withdrawal date that President Obama had previously announced, he seemed to pretty clearly state he was on board with the idea today:

Washington (CNN) — Gen. David Petraeus told CNN on Thursday that he supports President Barack Obama’s July 2011 deadline to start withdrawing U.S. troops from Afghanistan, a key point of contention between the president and many of his Republican critics in Congress.

Petraeus — tapped to replace Gen. Stanley McChrystal as the U.S. commander in Afghanistan — also expressed his respect and appreciation for McChrystal’s work and said the circumstances surrounding the change in command are “sad.”

Obama relieved McChrystal of his duties Wednesday after the general and his staff made comments in a Rolling Stone magazine article that appear to mock top administration officials.

Petraeus’ remarks to CNN’s Dana Bash and Ted Barrett were his first public comments since being chosen as the new U.S. military chief for the Afghan conflict. The Senate Armed Services Committee is set to begin his confirmation hearings Tuesday morning.

“I support the president’s policy, and I will also provide the best professional military advice as we conduct assessments,” Petraeus said.

The general said it’s a privilege to serve. “It’s obviously a hugely important mission,” he said.

I asked him if he sees himself doing anything to change the 2011 deadline to begin troop withdrawal. We’ve heard, already, Republicans are saying that they hope he does away with it. Democrats are saying, “No, no, no, we’ve got to keep it.” The answer was, “No. No. As I said, I support the president’s policy and I will also provide the best professional military advice as we conduct assessments.”

This really shouldn’t come as surprise because it’s doubtful that Obama would have appointed a Commanding General who didn’t support his policy on the war. At the same time, though, it should be remembered that July 2011 is only the beginning of the withdrawal. Neither Obama, nor McChrystal, nor Petraeus have said anything about how long that withdrawal will take place, or even that it will be a complete withdrawal of all American troops. If the Pentagon announces in July 2011 that a single brigade is being sent home, then it will have met the President’s deadline.

Yea, I know it doesn’t make any sense, but, as James has detailed in numerous posts here over the past several years, there’s very little about our current strategy in Afghanistan that makes sense anymore.