Invisible Adjunct has a follow-up on the thread from yesterday. She adds the following insight, gleaned from an analysis of several sources cited in the post:

It is quite true that the use of more adjuncts allows universities to offer more courses to more students. Given the cost-effectiveness of this trend, the danger, as I see it, is that entire professions become thoroughly, if not completely, adjunctified. If full-time English faculty, for example, agree to a system in which the part-timer teaches an English course for $2,500, at what point does the administration decide that the teaching of an English course is indeed worth no more than $2500? While King’s analysis seems to presuppose some sort of equilibrium (the continued existence of a tenure track alongside the adjunct track), the trend in some disciplines is in fact away from the tenure track and toward the adjunct track.

The other query I would raise: while King’s suggestion that “tinkering with the system may be more costly than we realize” is no doubt a valid concern (who knows what would be the unintended consequences of tinkering?), it seems to assume a good deal more power and agency on the part of faculty than is probably the case. I believe that tenure is now under attack. The public does not support it, and neither do significant numbers of university administrators. Though faculty teaching at elite, private insitutions are probably safe, those teaching at publicly funded schools are not. Without an active effort to halt (if not reverse) current trends toward part-time faculty, it is difficult to see how adjunct-heavy disciplines can maintain and defend the continued existence of a tenure track.

While I agree with IA’s points on adjunctification and lowering of professionalism, the problem is much deeper. Because most university administrators these days are educrats rather than scholar-administrators, they basically see faculty as an “expense” rather than as an asset. Indeed, I’m not sure anyone really thinks of professors as professionals anymore, and maybe with good reason. Not only are they radically lower paid compared to doctors and lawyers, but they don’t seem to view themselves in the same manner. The rather slovenly manner in which most dress for work is but one anecdotal example. 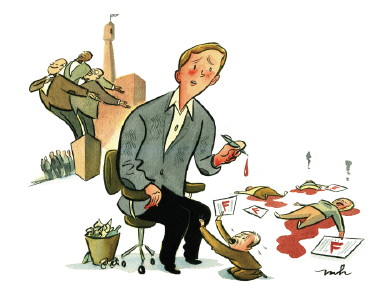