More than a decade after they’ve outlived their usefulness, one major company has asked that they be allowed to stop publishing residential telephone directories.

The digital age may claim another victim.

The residential White Pages, those inches-thick tomes of fine-print telephone listings that may be most useful as doorstops, could stop landing with a thud on doorsteps across New York later this year.

Verizon, the dominant local phone company in the state, asked regulators on Friday to allow it to end the annual delivery of millions of White Pages to all of its customers in New York. The company estimates that it would save nearly 5,000 tons of paper by ending the automatic distribution of the books.

Only about one of every nine households uses the hard-copy listings anymore, according to Verizon, which cited a 2008 Gallup survey. Most have switched to looking up numbers online or calling directory assistance. The phone book for many people, it seems, has gone from indispensable tool to unavoidable nuisance.

“Phone books have been a very visceral issue,” said Scott Cassel, executive director of the Product Stewardship Institute, an environmental group in Boston. “They do tend to pile up, particularly in apartments. More and more, people are finding that they don’t need them, but they can’t find a way to make them stop.”

Customers who prefer to look up phone numbers the old-fashioned way or, like Steve Martin’s character in “The Jerk,” get a thrill from seeing their names in print, would still be able to have the White Pages delivered to them in book form or on compact disc.

Verizon hopes that regulators will waive the requirement that it deliver White Pages to all New Yorkers before the end of the year, said John Bonomo, a company spokesman. He said he did not know how many copies of the White Pages were distributed annually, but said the total was in the millions in New York City alone.  James Denn, a spokesman for the state’s Public Service Commission, said that it had not received a similar petition from any other phone service provider.

Verizon has a similar request before regulators in New Jersey, Mr. Bonomo said. In some states, including Florida, Ohio, Oklahoma and Georgia, AT&T has already received approval to stop delivering White Pages to all residents.

But Mr. Cassel, whose group’s causes include reducing the production of unwanted telephone directories, said AT&T had withdrawn a proposal to end annual distribution in North Carolina after advocates for the elderly complained that some people might lose contact with friends and neighbors if they did not receive updated directories.

While I get that telephone service is a regulated utility, it’s baffling that a company has to petition government to stop delivering a wasteful product.  Especially if they’re actually going to continue to make the product available to the small fraction of customers that still wants it.

It’s simply idiotic to keep wasting all that paper to produce and gasoline to deliver something that most of us don’t want.  In Northern Virginia, it seems that we get five or six of these things, as several providers dump off volumes of white pages, yellow pages, or combination books.   Mine tend to remain in the driveway until Monday afternoon, when I carry the recycling bins down, at which point I toss them in.   What a waste. 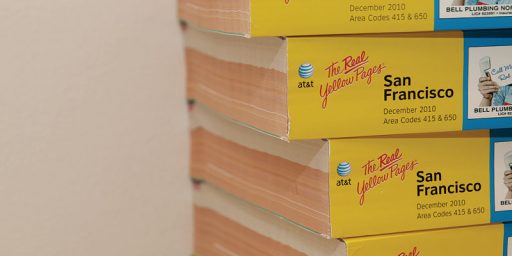