WaPo reports Iraqi TV Shows Men Said to Be U.S. Apache Pilots . Unlike the prisoners captured over the weekend, these two appear to have been treated humanely until now. 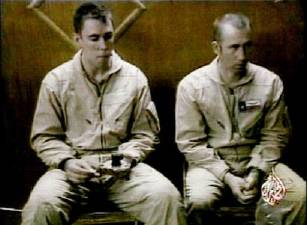 One thing likely to come out of this war is heightened attention to the wisdom of using helicopters in these missions. So far, the vast majority of soldiers killed or captured in this war have been involved in helicopter crashes. It may simply be that they are not suited for desert warfare; they had a horrible record in the first Gulf War as well. I would prefer to see scenes like this end: 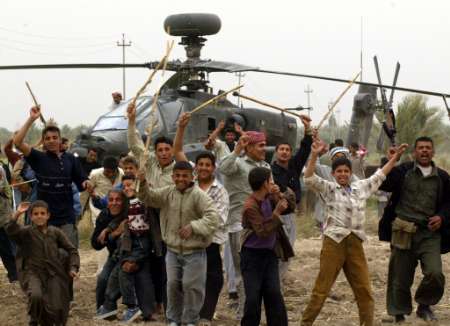 Iraqis celebrate near an Apache military helicopter in the Hindiya district, 120 km south-west of Baghdad, March 24, 2003. Iraq said on Monday that Iraqi farmers had shot down two U.S. helicopters south of Baghdad and vowed to show the pilots on television, just as it did with other captured and killed soldiers on Sunday. A U.S. defense official in Washington confirmed that one Apache Longbow helicopter was down in Iraq. He made no comment on the Iraqi claims that a second attack helicopter had been brought down and had no information on the fate of the pilots. REUTERS/Faleh Kheiber 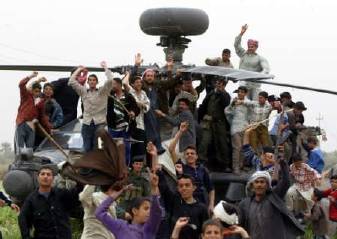 I also wonder why, given that the Iraqi forces have put up more resistance than expected, we have continued to push forward with a ground-based attack rather than taking advantage of our air superiority, including the much vaunted MOAB. One would think a couple well-placed bombs would eliminate the enemy’s hostile will. I am not being defeatist–I continue to believe we will prevail, that the war will be short, and that Coalition casualties will be light. I just want the war as short and the casualties as light as possible.