Despite tumultuous events abroad, the public’s news habits have been relatively stable over the past two years. Yet modest growth has continued in two important areas online news and cable news. Regarding the latter, the expanding audience for the Fox News Channel stands out. Since 2000, the number of Americans who regularly watch Fox News has increased by nearly half from 17% to 25% while audiences for other cable outlets have been flat at best.

Fox’s vitality comes as a consequence of another significant change in the media landscape. Political polarization is increasingly reflected in the public’s news viewing habits. Since 2000, the Fox News Channel’s gains have been greatest among political conservatives and Republicans. More than half of regular Fox viewers describe themselves as politically conservative (52%), up from 40% four years ago. At the same time, CNN, Fox’s principal rival, has a more Democrat-leaning audience than in the past.

The public’s evaluations of media credibility also are more divided along ideological and partisan lines. Republicans have become more distrustful of virtually all major media outlets over the past four years, while Democratic evaluations of the news media have been mostly unchanged. As a result, only about half as many Republicans as Democrats rate a variety of well-known news outlets as credible a list that includes ABC News, CBS News, NBC News, NPR, PBS’s NewsHour with Jim Lehrer, the New York Times, Newsweek, Time and U.S. News and World Report.

What’s particularly interesting is that, while Republicans trust Fox News more than they do other sources, while Democrats trust it less than virtually any other source, Democrats and Republicans have the same level of trust for Fox. 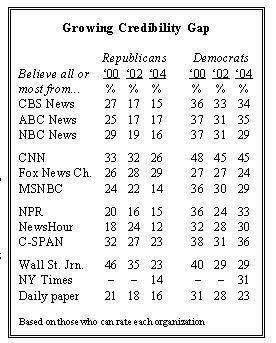 There’s a lot of interesting information in this report. What’s missing, though, is discussion of blogs and other online media. Granted, we’re still a small part of the overall picture–and much of what we “report” on is from the Big Media. Still, our share is growing geometrically while the traditional venues stagnate or decline.

Howard Kurtz comments on this research, as well:

While the percentage of people who rate CNN as highly credible has slid from 42 percent six years ago to 32 percent now, the study says, “more continue to say they can believe all or most of what they hear on CNN than say that about Fox News Channel,” whose credibility rating is 25 percent. MSNBC clocks in at 22 percent. (“60 Minutes” edged the field with 33 percent.)

In a finding that surprised Andrew Kohut, the Pew center’s director, 29 percent of Republicans say Fox News Channel is credible, only slightly more than the 26 percent of GOPers who feel that way about CNN. Among Democrats, though, 45 percent give CNN a thumbs up for credibility, compared with 24 percent for Fox News Channel.

Asked about the decline in those credibility numbers, Furman says that “perceptions may change a bit year to year, but the important number is clear: Of all the news organizations included in the survey, our audience most closely mirrors the ideology of the American public.”

Fox News Channel, the top-rated cable news network, sees it differently. “The study confirms that while our audience continues to increase and our credibility expands, our competitors are hemorrhaging viewers and losing America’s trust,” says spokeswoman Irena Briganti. She adds: “It’s fair to ask why so many Democrats are watching CNN if everyone has to ask why so many conservatives are watching us.”

As Will Collier observes, however, what this research shows is that the public simply doesn’t trust any of the mass media.

Things have gotten to the point where the President of the United States sees no reason not to ignore the networks and the New York Times. If the coin of your realm is trust, and influence is what you buy with that coin, what do today’s viewership realities say about the state of the realm?

Personally, I find the results rather bemusing. I yield to few in my cynicism and yet find, by and large, that all of the major media outlets are worth reading/watching/listening to in terms of veracity. Sure, there are various biases in play and quite a bit of sloppiness. But rather little intentional misinformation in the main. Even with all the problems NYT has had of late, I at least skim their site every day and accept most of what I read as their best take on the truth.