With Supreme Court oral arguments on the Constitutionality of Proposition 8 only weeks away, a new poll finds that  Californians now support same-sex marriage by a margin of 2-to-1:

The Field Poll found 78 percent support among people 39 and younger and a solid majority of middle-aged residents now back gay marriage — 56 percent. Even among senior citizens there is 48 percent support, compared with 42 percent against.

The overall results represent a reversal in views about the issue in the 36 years the Field Poll has been taking surveys on gay marriage. In 1977, when the first survey was conducted, only 28 percent approved of gay marriage, while 59 percent were opposed.

The most recent survey found broad-based support, with the majority of most subgroups within the survey — men and women, all racial and ethnic groups, and each major region of the state — saying they favor gay marriage.

Ninety percent of people who described themselves as liberal said they approved of allowing gay couples to wed. The survey found 53 of Republicans were opposed, while 39 percent approved. Just 25 percent of those who said they were conservative favored gay marriage.

Via Nate Silver, this chart from the Bay Area News Group shows just how dramatically public opinion has changed in just the last ten years in America’s largest state: 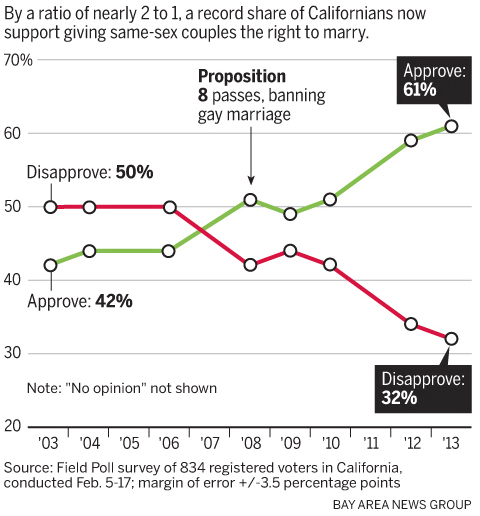 The changes in public opinion in California mirror those in public opinion nationwide, but the changes in this one state have been far more dramatic. One suspects that if Proposition 8 were put up to a vote again today, the result would be far, far different. What this also tells us, though, is that a ruling from the Supreme Court that Proposition 8 is unconstitutional would not cause significant undue political outrage among California voters.