Reuters is abuzz with news that Colombia is publishing a Pope John Paul II comic book. I'd point out that Marvel already did this--in 1983.

Reuters is abuzz with news that Colombia is publishing a Pope John Paul II comic book. I’d point out that Marvel Comics did this already–in 1983.

Pope John Paul II is being reborn in a Colombian comic book as a superhero battling evil with an anti-Devil cape and special chastity pants. The first episode of the “Incredible Popeman” is about to go on sale in Colombia and shows the late Polish pontiff meeting comic book legends such as Batman and Superman to learn how to use superpowers to battle Satan. “The pope was a real-life superhero, of flesh and blood,” said Colombian artist Rodolfo Leon, a non-practicing Catholic who has been working on the comic book for about a year.

Like any self-respecting superhero, the Incredible Popeman has a battery of special equipment. Along with his yellow cape and green chastity pants, the muscular super-pontiff wields a faith staff with a cross on top and carries holy water and communion wine. In the comic book, the pope dies and is reborn with superpowers beyond the infallibility Catholic doctrine gave him on Earth.

Kevin Aylward and Michele Catalano make note of this as well.

Apparently, neither they nor the folks at Reuters have a copy of this in their collection: 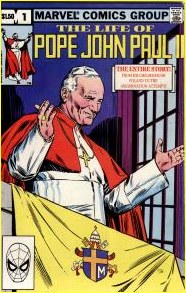 Currently, Mile High Comics is paying less than cover price for it. One presumes its value will increase.

Update: Several people have it at eBay, where prices range from $5-35. Some rather, erm, interesting returns come up in addition to the Pope comic.