After skipping such events in his first thirteen months in office, the President tried his hand at stand-up last night to mixed reviews. 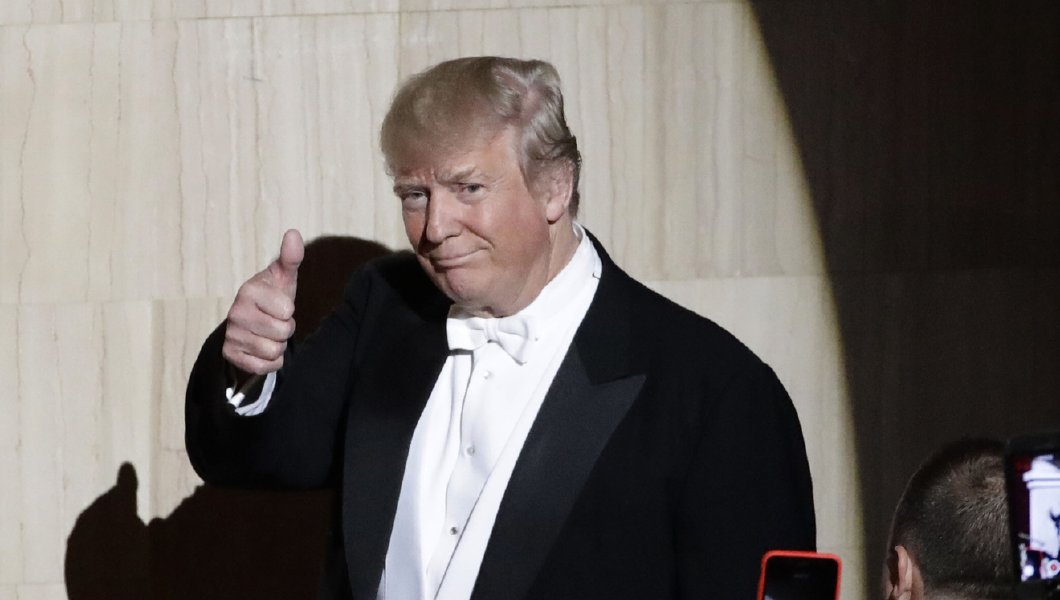 President Trump did a stand-up routine at the Gridiron Club Dinner last night. It wasn’t broadcast but the reviews were mixed.

Not surprisingly, the Daily Beast, which filed it under Yikes!, gave it a thumbs down (“Trump Jokes Melania Might Leave Him at Gridiron Dinner“):

Just a few hours after he suggested that perhaps America should follow China’s lead with the whole “president for life” thing, President Donald Trump took the stage to tell some jokes at the annual Gridiron Club Dinner, an event intended to honor the free press in Washington, D.C.

Unlike the widely-televised White House Correspondents’ Association dinner, which Trump decided to skip last year, there are no cameras allowed inside the white-tie Gridiron event. So while we don’t have the benefit of seeing video of the president’s performance, we do have the White House pool report—as well as eyewitness accounts—to give us a sense of what went down.

It was, most reviews indicate, slightly less disastrous than the 2016 Al Smith dinner, during which Trump was booed for his so-called “jokes” about how much Hillary Clinton “hates Catholics.”

Trump also excused his late arrival by suggesting that Jared Kushner couldn’t get through security. He said he offered Attorney General Jeff Sessions a ride to the event but he “recused himself,” belying a very real concern the president has expressed in the past.

“I won’t rule out talks with Kim Jong Un,” Trump said, per Axios. “As far as risks with talking with a mad man—that’s his concern, not mine.”

He combined an attack on CNN with a shot at his former chief adviser, saying, “It’s been a very tough year for CNN. They’ve lost a tremendous amount of credibility this year. And your best reporter, Steve Bannon. That guy leaked more than the Titanic. Boy, did he leak.”

According to Mother Jones Washington bureau chief David Corn, Trump “humiliated” his wife, First Lady Melania Trump, who accompanied him to the event. He was likely referring to a joke Trump made about his recent spate of White House departures. “So many people have been leaving the White House. It’s invigorating since you want turnover. I like chaos. It really is good,” he said. “Who’s going to be the next to leave? Steve Miller or Melania?”

Also not surprisingly, Fox News is more appreciative (“At Gridiron Dinner, Trump jokes on politics — but gets serious about North Korea talks“):

But the president also used the occasion to deliver some serious remarks about North Korea.

“I won’t rule out direct talks with Kim Jong Un, I just won’t,” Trump said, according to Politico. “As far as the risk of dealing with a madman is concerned, that’s his problem, not mine.”

Umm, I hope that was a joke.

Trump also laid out the conditions for any such discussions.

“By the way, a couple days ago they said we would like to talk, and I said, so would we, but you have to de-nuke, you have to de-nuke. So let’s see what happens … Maybe positive things are happening, I hope that’s true … We will be meeting and we’ll see if anything positive happens,” the president said.

That sounds like Trump going off-script more than anything else. The rest of the Fox report is cribbed from other reports but they end:

When others were speaking or performing, Trump was reportedly a good sport — laughing and applauding at times during the evening’s entertainment.

He closed by saying: “I just want to say this, this is one of the best times I’ve had with the media — this might be the most fun I’ve had since watching your faces on Election Night.”

President Donald Trump poked fun at himself and members of his administration who have given him grief at an annual Washington social event Saturday, joking about former chief strategist Steve Bannon, Attorney General Jeff Sessions and even first lady Melania Trump.

At the Gridiron Club Dinner on Saturday night, a white-tie event typically including both journalists and politicians, and featuring jokes about both sides of the aisle, the President made light of a public feud with his attorney general, an embarrassing demotion of sorts for his son-in-law, Jared Kushner, and any possible tension in his marriage over alleged affairs.

Saturday was a rare appearance for the President, who has avoided events in the past where he might mingle with the media or Washington establishment. The annual closed-door dinner, hosted by the exclusive group of top Washington journalists, traditionally includes a night of jokes, skits and musical numbers.

Any sort of anger and frustration Trump might have felt over this past week, whether over Sessions’ decision to leave an investigation into alleged surveillance abuses to the Justice Department’s watchdog, a report that at least four nations sought to exploit Kushner, or the resignation of one of his closest aides, Hope Hicks, Trump didn’t show it.

Trump saved some of his edgier jokes for Democrats. He referred to House Minority leader Nancy Pelosi as “crazy,” quipped that Rep. Maxine Waters should take an IQ test, said he could kick “sleepy” former Vice President Joe Biden’s ass, and joked that Sen. Elizabeth Warren suggested the US, Iran and North Korea “smoke a peace pipe” — a remark about her claims of Native American heritage.

Trump, who has attacked the press as an “enemy of the people,” teased the media in more jovial manner Saturday night.
Wrapping up his speech, Trump joked that he had to be “up early” to watch “Fox and Friends,” but that the night was “one of the best times I can ever remember having with the media.”

“This might be the best night I’ve had since watching your faces on election night,” Trump said.

Ditto NBC News (“Trump puts feud with media on ice at joke-filled Gridiron dinner“). I won’t excerpt their report, as it contains nothing not already covered.

It’s really hard to judge these things without watching the clip, which likely won’t be forthcoming here. Most of the jokes are pretty good, all things considered. Certainly, better than the lines he delivered at the infamous Al Smith dinner.

Having presidents attempt to do stand-up a couple times a year has always struck me as rather odd. But all of the presidents going back to at least Ronald Reagan have been pretty damned good at it. Many have had excellent comic timing. Trump, at least since emerging as a politician, has not displayed that quality.