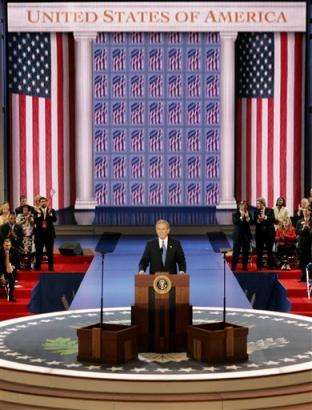 I had another engagement last night and missed the speech, which I TiVo’d and will watch this evening. The sound clips I’ve heard so far sound good, although a bit State of the Union-ish.

WaPo has the transcript: President Bush’s Acceptance Speech to the Republican National Convention. The speech reads well, although a bit too wonky and with too many leftovers from 2000 for my tastes.

The AP wire story sounds like an op-ed, which is rather unusual. I love the headline: Bush Glosses Over Complex Facts in Speech. Well, yes. An acceptance speech isn’t a public policy conference.

If John Zogby is right–and he often is–the convention did its job:

President George W. Bush and Vice-President Dick Cheney have taken a two point lead over Massachusetts Senator John Kerry and North Carolina Senator John Edwards (46%-44%), according to a new Zogby America poll. The telephone poll of 1001 likely voters was conducted from Monday through Thursday (August 30-September 2, 2004) during the Republican National Convention in New York City. Overall results have a margin of sampling error of +/-3.2

Pollster John Zogby: Ã¢€œThe President has had a very good convention following a good week where he also dominated the news with his own message: leadership, strength, decisiveness. Not only has he dominated the news but he also has thrown Kerry off his game. Last week I said the PresidentÃ¢€™s top goal from the convention was to make sure his Republican ducks were all in a row. He needed to bring back and strengthen his ties with both wavering moderates (concerned about Iraq) and deficit hawks. His messages have clearly elucidated why the war and why the spending. This is the first time this year that the President has achieved 90% support among Republicans. He has also strengthened his numbers among investors. Ã¢€œThe President has widened his lead in the Red States and tightened things up considerably in the Blue States. For the first time in months he now leads among Independents and Catholics. Ã¢€œWhile the President has improved his numbers, he still has a negative re-elect, job performance, and wrong direction.

Unless the Miller speech causes a backlash, one would think the numbers would be slightly higher after the Bush speech, once the early days roll out of the average. Certainly, this isn’t a huge bounce by any historical standard but it’s more than John Kerry got out of his convention.

Joe Gandleman thought the speech weak on style but strong on substance. “Partisans can (and will) hotly debate Bush’s list of accomplishments and what he proposed. But, again, it was when he got into his verbal duel (apologies to Zell Miller for use of that word) with Kerry and terrorism that Bush glowed.”

Dan Drezner missed the speech, too, but let his readers blog it for him. The birth of a daughter apparently takes precedence over blogging.

Stephen Green‘s brain hated the speech but his gut loved it.

Glenn Reynolds, too, missed the speech but provides a round-up of live bloggers and an assessment via a British time machine.

Andrew Sullivan thought the speech “superb” and “the second best” Bush speech ever but still can’t support his reelection.

Donald Sensing thought the delivery was unpolished and the content proved once again that “the Reagan revolution is dead.”

Kevin Drum found the delivery “better than average” but didn’t learn anything new.

Rob Tagorda thought the speech got better as it went, saving the best for last.

Steven Taylor agrees, calling it “excellent” overall but rather “laundry listish” at the beginning.

Grading the Pollsters for the 2006 Elections