Agency heads are pleading President Obama's case in advance of a shutdown. 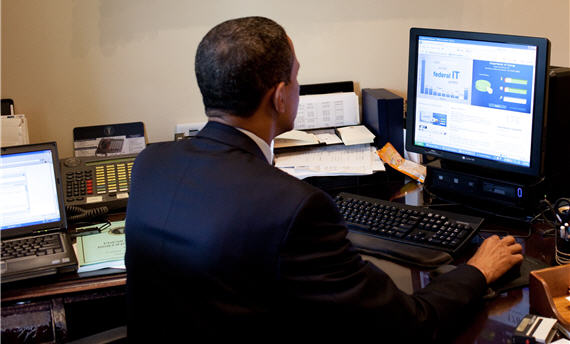 Bookworm Room‘s Don Quixote (which I’m guessing is not his given name) wonders, “Am I making something of nothing or is this outrageous?” His wife, an employee of the Treasury Department, today received a mass email from the Assistant Secretary in charge of such things which read, in part:

Throughout the discussions about funding for the rest of the fiscal year, the President has made it clear that he does not want a government shutdown, and the Administration is willing and ready to work day and night to find a solution with which all sides can agree.

The statement has nothing to do with the shutdown itself or what will happen if there is a shutdown. It is a purely political and completely partisan statement. Obama is working day and night and it’s those terrible Republicans who are inflicting this terror upon you. So, am I making something out of nothing or is this a thoroughgoing abuse of what should be a non-partisan office?

I had a similar reaction yesterday afternoon when I saw almost identical language in a similar message from Deputy Secretary of Defense William J. Lynn III. A quick Google search reveals variations on that boilerplate went to agencies throughout the government, ranging from OPM to NASA. The phrase “the President has made it clear that he does not want a government shutdown, and the Administration is willing and ready to work day and night to find a solution with which all sides can agree” appears in all of them.  WaPo’s Ed O’Keefe, who runs the Federal Eye blog, has collected tons of them and didn’t seem to think anything amiss.

It’s true that, in most–if not all–cases, the sending individuals are political appointees who serve at the pleasure of the president (or is that “the President”?). But they’re ostensibly acting as agency heads, not partisans.

The tone of the message isn’t “outrageous,” I don’t think, but it’s a bit mmore than “something of nothing.” Presumably, Obama actually doesn’t want a government shutdown, since the consequences are serious, although he does seem to have calculated that the Republicans will be damaged more than him. And I’m sure he’s willing to stay up another three hours to get a deal struck–which, by definition, all sides would have to agree on. But should he be using ostensibly non-partisan federal senior managers to send out this message?

Even agency heads who aren’t political appointees answer to the president, who is the head of the Executive Branch of government. But they’re not supposed to take sides against Congress in ongoing political battles.