Presidents, the Military, and Stagecraft

Dana Milbank starts an otherwise thoughtful piece with a rather sophomoric attempt at humor: First, the good news: President Obama will not be wearing a flight suit when he addresses the cadets at West Point on Tuesday night. Nor will he wear a bomber jacket with the presidential seal on the chest, nor even, the White House promises, a windbreaker with the word ARMY in big letters.

“You can count on no military garb,” assures Dan Pfeiffer, the White House communications director.

Ha!  Except that, of course, President Bush didn’t wear of thing when he addressed cadets at West Point — he wore a suit.  Like many presidents before him, he wore military garb when meeting troops out in the field, whether it was a leather jacket or the infamous flight suit.   Which, incidentally, was incredibly well received at the time by the sailors and earned by the former Air Force fighter pilot.

Whether President Obama will follow suit — or has in the past — I don’t know.   The closest I’ve been able to find through a quick search of Google Images is the pic of him in a USMC PT shirt at right.  I’m not sure what the occasion was — the gentlemen in the background are not sporting Marine haircuts — but presume it was appropriate.

One of the common complaints of George W. Bush’s presidency was his tendency to politicize the military and turn troops into props. The man seemed to make more appearances before military audiences than Bob Hope did. But now Obama is antagonizing many in his party with an expected announcement that he is sending more troops to Afghanistan, and, to rub it in, he’s making the announcement at one of Bush’s favorite military locations: the U.S. Military Academy at West Point — the very birthplace, seven years ago, of the Bush Doctrine.

Obama’s fondness for audiences in uniform is not yet in the same category as his predecessor’s. Beyond the infamous “Top Gun” landing aboard the USS Abraham Lincoln, and the Thanksgiving turkey he served to troops in Iraq, Bush routinely used military-themed backdrops for his speeches: fighter jets, camouflage nets, American flags, military bands and, best of all, thousands of troops applauding or shouting “Hoo-ah” at the right moments.

Still, Obama’s flirtation with military imagery should be of concern to his allies on the left, who are already unhappy with the hawkish direction his Afghanistan policy has taken.

I’m generally not a fan of politicians, even presidents, using troops — or schoolchildren, another pet peeve — as props for their political speeches.   But Milbank is lumping dissimilar things together.  Surely, visiting troops deployed to a war zone at Thanksgiving is an appropriate gesture by the commander-in-chief?  Certainly, Bush’s visit was joyously received.  (As, incidentally, were similar visits by John Kerry and Hillary Clinton.)

The “Mission Accomplished” speech will live in infamy, of course, because of how the Iraq War unfolded afterwards.  But the sailors and Marines of the Lincoln had in fact accomplished their mission.  Were they being used as stageprops in a political victory lap by the president?  Yes.  But they were also being publicly praised for their service.

Presidential addresses to the uniformed military were relatively rare before Bush. A tally by George Mason University found that in past years, presidents sometimes spoke to military groups only once (Bill Clinton in 1993, Richard Nixon in 1969), twice (Gerald Ford in 1974) or not at all (Ronald Reagan in 1985). But Bush gave “far more” such speeches, including 13 in 2005 alone.

It’s worth noting that, with the exception of Nixon, none of those presidents were in office during a major war, much less two simultaneous ones.   That rather changes things.

I’m a little more concerned with the use of West Point and its cadets for these venues, since they’re the future junior leaders of our force rather than troops in harm’s way.  The Bush Doctrine speech and tonight’s will doubtless be political as well as tactical.  Then again, the two are necessarily intermingled. 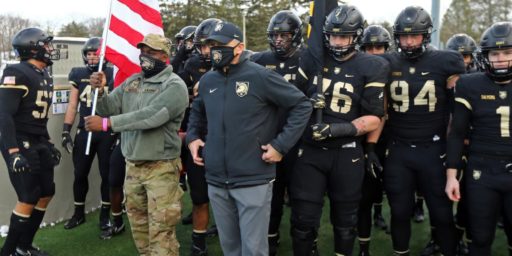