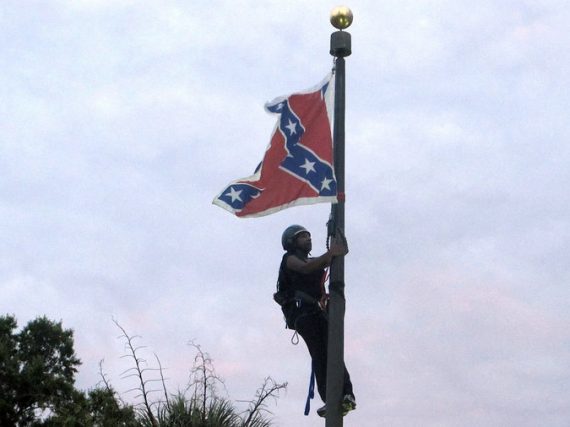 Overnight, a protester climbed up a flagpole outside the South Carolina State Capitol and did something the State of South Carolina should have done a long time ago:

COLUMBIA Two political activists with roots in Charlotte removed the Confederate flag from a pole on the South Carolina capitol grounds early Saturday morning, but state employees returned the flag to its position within several hours.

Brittany Ann Byuarim Newsome, known as Bree, climbed the pole and pulled the flag down about 5:30 a.m. Saturday. The S.C. Bureau of Protective Services arrested her and James Ian Tyson at the State House about 6:15 a.m.

The Confederate flag has been at the center of a debate in Columbia the past week in the wake of the massacre of nine African Americans in a Charleston church by a white supremacist.

“This act was not just in defiance to the massacre at Mother Emmanuel, but in defiance to the systematic terrorism and oppression black bodies have suffered for centuries in this country,” says a statement on theIgniteNC web site. “The fact that the flag could not be removed by the governor alone as it is being protected by congressional super majority procedures illustrates how endemic white supremacy is within our structure.”

Newsome is listed as western field director for the group, which works to mobilize young people for change. “She is also an organizer and leader in the Charlotte community, organizing primarily around the issue of police brutality,” the group’s web site says, citing her work demanding justice in the killing of Jonathan Ferrell by Charlotte-Mecklenburg police.

#FreeBree, a Twitter hashtag related to her arrest, is trending in Charlotte. The Bureau of Protective Services lists her as a 30-year-old Raleigh resident but the Bree Newsome web site shows her at the base of a post at Freedom Drive bearing the city of Charlotte logo.

Tyson, listed as a 30-year-old Charlotte resident, was active in the Rainforest Action Network and Occupy Charlotte during the buildup to the 2012 Democratic National Convention in Charlotte. He made the news at the time when he was arrested on a traffic charge and policetried to hold him for the duration of the convention, saying his name was on a terrorist watch list.

Newsome and Tyson were charged with defacing a monument, according to a protective services news release. The charge is a misdemeanor that carries penalties of up to three years in prison or a fine of up to $5,000 or both.

The Protective Services release said authorities saw a woman use climbing gear to scale the flagpole, which is beside the Confederate soldier monument at the end of Main Street on the north side of the State House. The woman refused to come down until she unhooked the flag. She was arrested when she came back down, the release said. A man was with her inside the wrought iron fence surrounding the flag pole, police said. The climbing gear was still on the flag pole after the arrests were made.

At about 7:45 a.m., a maintenance worker and a state security officer, neither of whom would give their names or comment, raised a new banner after removing it from a plastic sheet. The two state employees who arrived on the State House grounds to put the flag back up were African-Americans.

Obviously, this woman committed a crime and she should be charged for it just as anyone who committed an act of civil disobedience would be, although it goes without saying that hte potential maximum sentence in this case of three years in jail would be absurdly excessive if it were imposed. At the same time, though, there’s no small part of me that really doesn’t have a problem with what this woman did. The flag never should have been where it is to begin with given the fact that it is a banner associated with a regime founded upon the ideas of racism, the maintenance and preservation of slavery, and treason. More importantly, though, the fact that the banner was raised in Columbia during the Civil Rights Era for the same reason it was raised on official buildings in other parts of the South, as a symbol of defiance against a Federal Government seeking to enforce the law and protect the civil liberties of African-Americans and as a banner to intimidate the African-American residents of the South themselves. South Carolina’s political leaders, led by Governor Nikki Haley, have already begin the process of removing the flag from the State Capitol grounds because they have finally come to recognize what it is. Newsome simply decided to take matters into her own hands. Yes,it was against the law and that needs to be dealt with, but sometimes laws need to be broken to advance a greater good. This was one of those times. One wonders why officials bothered putting a new flag up.