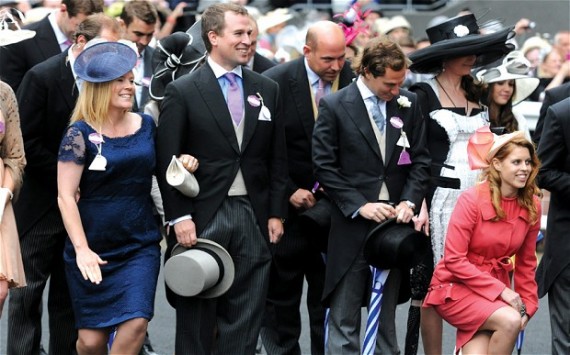 Telegraph (“The Queen tells the Duchess of Cambridge to curtsy to the ‘blood princesses’“):

The Duchess of Cambridge may be the future queen, but she has discovered that there are several women in the Royal family to whom she must show reverence. Mandrake hears that the Queen has updated the Order of Precedence in the Royal Household to take into account the Duke of Cambridge’s wife.

The new rules of Court make it clear that the former Kate Middleton, when she is not accompanied by Prince William, must curtsy to the “blood princesses”, the Princess Royal, Princess Alexandra, and the daughters of the Duke of York, Princesses Beatrice and Eugenie.

When William is with her, Kate does not need to bend the knee to either of them, but she must curtsy to the Prince of Wales, the Duchess of Cornwall, the Queen and the Duke of Edinburgh.

Despite being married to the Queen’s son, the Countess of Wessex will, however, have to curtsy to Kate, even when William is not present.

“Updating the Order of Precedence has been a simple matter of following the precedent set when the Prince of Wales married Camilla Parker Bowles,” a courtier tells me.

A document is said to have been circulated privately in the Royal Household, clarifying Kate’s status. When the Order was last updated, after Prince Charles’s second marriage, in 2005, the Countess of Wessex was reported to be upset that she now had to curtsy to Camilla. “She didn’t like it one bit,” a senior courtier was quoted as saying.
The Earl of Wessex’s wife had previously been the second-highest ranking woman in the Royal family because neither of the Queen’s other sons, Charles and Prince Andrew, were married.

However, after Charles remarried, the Queen changed the Order of Precedence “on blood principles” so that neither Princess Anne nor Princess Alexandra, the granddaughter of George V, would have to curtsy to Camilla when her husband was not present.

Although the etiquette may seem arcane, it is taken very seriously by the Royal family, whose members bow and curtsy to each other in public and in private. A vivid illustration came after the Trooping the Colour ceremony last weekend, when Kate could be seen curtsying to Prince Philip on the balcony of Buckingham Palace.

Arcane is one word for it; silly is another.  I suppose they have to keep this nonsense up in public for the whole “royalty” shtick to continue to draw tourism and all the publicly financed perquisites. But they seriously do this in private, too?