Yet another top Trump administration official has resigned.

Yet another top Trump administration official has resigned.

Rachel L. Brand, the No. 3 official at the Justice Department, plans to step down after nine months on the job as the country’s top law enforcement agency has been under attack by President Trump, according to two people briefed on her decision.

Ms. Brand’s profile had risen in part because she is next in the line of succession behind the deputy attorney general, Rod J. Rosenstein, who is overseeing the special counsel’s inquiry into Russian influence in the 2016 election. Mr. Trump, who has called the investigation a witch hunt, has considered firing Mr. Rosenstein.

Such a move could have put her in charge of the special counsel and, by extension, left her in the cross hairs of the president.

Ms. Brand, who became the associate attorney general in May, will become the global governance director at Walmart, the company’s top legal position, according to people briefed on her move. She has held politically appointed positions in the past three presidential administrations.

There’s no indication in the story that the President directly pressured her to quit. Indeed, since she didn’t currently have any ties to the Russia investigation, I doubt she was on his radar screen. But the current political environment has to make it extremely unsatisfying to work at the highest levels of government—let alone at the Justice Department. Moving to the private sector for what one presumes is something like a tenfold salary increase seems like a no-brainer for someone who isn’t a Trump loyalist.

House Conservatives Want To Impeach Rod Rosenstein For Some Reason 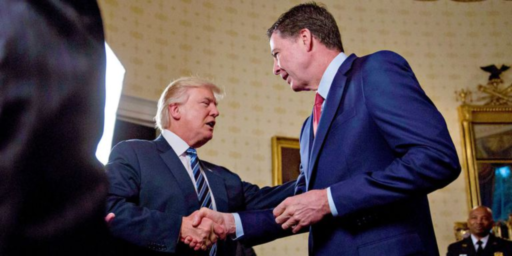