Racists, RedState, and the GOP Netroots

Matt Stoler asserts that the reason that the Republican Party does not work as closely with its “netroots” as the Democrats with theirs is that,

The RNC cannot afford to embrace their netroots as an audience because of the increasingly extreme and racist nature of  their base.  It’s not Redstate specifically, it is, as Glenn Greenwald notes, their entire pundit class.  Actually, it goes beyond that, to their leadership.  For instance, it’s not just James Dobson embarrassing Republicans anymore; Senator Jeff Sessions, Senator Sam Brownback, and Senate candidate Michael Steele have all compared stem cell research to the holocaust.

But the right-wing blogosphere is where racist and extreme sentiment is most obvious and trackable, it is a veritable steady diet of the stuff.  No matter how persuasive Patrick Ruffini might be, and he seems like a smart fellow, the RNC cannot afford to be tagged with their base sentiment, whether it’s Little Green Footballs calling for nuclear attacks on Muslims (or ‘constitutionally protected hate speech’ as advertisers who don’t want to be associated with the site see it), right-wing and neo-Nazi embraces of extremist groups like the Minutemen, voxday calling rape victims ‘stupid’, or front-pager Blanton at Redstate calling Coretta Scott King’s funeral which President Bush spoke at a ‘Def Comedy Jam spectacle’ with ‘demands for handouts’.

Many Republicans are fine, honest, and hard-working people who care deeply about their country.  I have no doubt that Mike Krempasky falls into that category.  But I spent seven months in New Jersey going through right-wing message boards, I’ve read FreeRepublic.com, and I’ve been to Townhall.com Meetups, and I can tell you that there is a substantial portion of the right-wing base that has, as Redstate community-leader Blanton does, a vicious racist mentality.

RedState co-founder Mike Krempasky observes that, “If you didn’t notice – our guys beat their guys eight ways from Sunday online in 2004. And if I were a betting man – I’d say tantrums like this are simply going to ensure more of the same.” I would agree.

More to the point, though, I would observe that, if the message boards at FreeRepublic and LGF are Stoler’s guage of the Republican Party’s netroots, then he is seriously missing the boat. For one thing, there’s much worse fare at Democratic Underground, which I would consider their proper analogues. Further, the comments sections and diaries at DailyKos and Eschaton–which from Stoler’s own premise are far more powerful than any Republican leaning sites–are filled with reprehensible venom and utter nonsense.

The bottom line is the open communities like unmoderated message boards and blog comments sections are messy and often degenerate into insipid vulgarity. The Republican Party, for a variety of reasons, is less comfortable associating with them than is the Democratic Party. 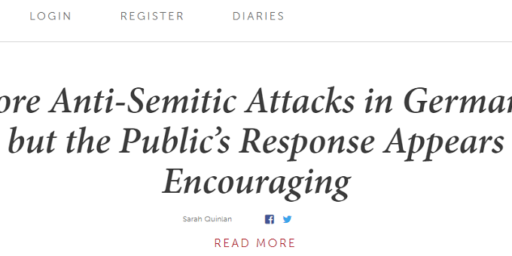