Rand Paul calls Mitt Romney out over his comments about Presidential War Powers. 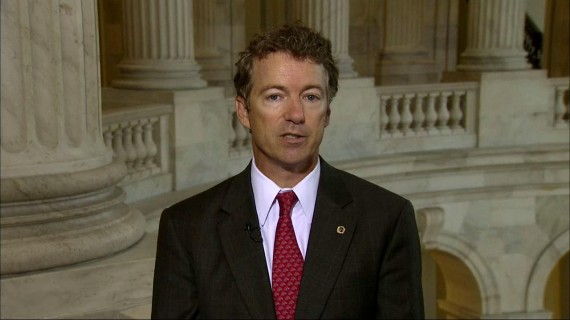 On Monday I noted that Mitt Romney had stated during an appearance on Face The Nation that he believed that he could take military action in Iran with first getting Congressional approval. This happened only about two weeks after Kentucky Senator Rand Paul had formally endorsed Romney for President, a move that actually caused some friction with many Paul supporters not the least because of Romney’s foreign policy positions, which are quite different from those of Congressman Paul and his supporters. Today, Senator Paul appears at National Review where he takes very strong exception to what Romney said notwithstanding his endorsement:

I do not yet know if I will find a Romney presidency more acceptable on foreign policy. But I do know that I must oppose the most recent statements made by Mitt Romney in which he says he, as president, could take us to war unilaterally with Iran, without any approval from Congress.

This is a misreading of the role of the president and Congress in declaring war.

The Constitution clearly states that it is Congress that has the power to declare war, not the president. The War Powers Act also clearly states that U.S. forces are to engage in hostilities only if the circumstances are “pursuant to (1) a declaration of war, (2) specific statutory authorization or (3) a national emergency created by attack upon the United States, its territories or possessions, or its armed forces.”

Absent these criteria, the president has no authority to declare war.

Even if the president believes he has such authority, the War Powers Act goes on to require the president to seek congressional approval within 60 days of conflict.

Of course, Paul doesn’t let President Obama off the hook either, but even in doing so he manages to take a not too subtle swipe at the guy he had endorsed just two weeks ago:

President Obama was elected on a platform of ending wars, yet he has opposed every effort made by me and others in the Senate to do that. He opposed my resolution to end the Iraq War. He has refused my urgings to end the war in Afghanistan more quickly. He started another war in Libya, and this time went further into unconstitutional territory than previous presidents by not even seeking Congressional approval whatsoever. I opposed him when he did that. Anyone who believes President Obama is less aggressive internationally than his predecessors is mistaken.

One of the primary focuses of Romney’s criticisms of President Obama’s foreign policy record, of course, has been the demonstrably false assertion that he has been insufficiently aggressive in protection of American interests and that he was spent his time traveling the world “apologizing for America.” Additionally, the core of Romney’s own foreign policy statements has been centered around the idea that he would be more agressive than Obama on a wide variety of issues ranging from Iran to our relationship with Russia and China.

For that reason, I am rather puzzled why Paul would say that he’s unsure if he would find Romney’s foreign policy more acceptable than President Obama’s. Given the fact that Romney is explicitly saying that he intends to be more aggressive and interventionist than Obama has been in his three and a half years in office it seems clear that Paul is likely to find a Romney Presidency at least as unacceptable on foreign policy issues as the Obama Administration, if not more so. Of course, Senator Paul has already revealed himself to be a much smarter political player than his father was and his endorsement of Romney is as much a recognition of political reality and an attempt to boost his own political future than it is a full throttled endorsement of Mitt Romney. Indeed, I don’t think you’ll see Rand Paul appearing anywhere as an official campaign surrogate, especially not on a television program where his rather obvious disagreements with the nominee on issues like foreign policy would quickly become fodder for discussion. So, to some extent, Paul is free to speak his mind on these issues notwithstanding the endorsement because he does not, and likely never will, speak for the campaign.

The sad thing is that Paul is likely to be the only Republican to call Romney out about his reckless comments on Face The Nation, or any of the other things that he has said about foreign policy during the course of the campaign. Indeed, during the GOP primary fight the only candidates who deviated from the neo-conservative aggressiveness that Romney is demonstrating now were Ron Paul, Jon Huntsman, and Gary Johnson, and we know how the voters treated them. At least in the GOP, it’s rather clear that Romney’s vision of a more aggressive, assertive United States is something that sells. What one has to wonder, though, is whether it will sell with the public as a whole now that we’re at the end of a decade in which we fought two wars that, in the end, became hugely unpopular with the nation as a whole.