Last week, I noted that Kentucky Senator Rand Paul, who may or may not end up running for President in 2014, argued that President Bill Clinton’s sexual dalliances should somehow be relevant in a race against Hillary Clinton in 2016. This week, Paul is continuing in that vein, arguing in an interview to be aired tomorrow that Democrats should return all the money that the former President has raised for  them:

Sen. Rand Paul, who has been in a bit of a tiff recently with the Clintons, says that any Democrat who has raised campaign money with former President Clinton should return the cash to protest his sexual behavior in the White House.

Speaking on C-SPAN’s “Newsmakers” program, in an interview airing Sunday, Mr. Paul said Democrats are being hypocritical by criticizing Republicans as waging a war on women while at the same time embracing Mr. Clinton, who was impeached for lying about a sexual relationship with a White House intern.

“They can’t have it both ways. And so I really think that anybody who wants to take money from Bill Clinton or have a fundraiser has a lot of explaining to do. In fact, I think they should give the money back,” Mr. Paul, Kentucky Republican, said. “If they want to take position on women’s rights, by all means do. But you can’t do it and take it from a guy who was using his position of authority to take advantage of young women in the workplace.”

There can really only be one explanation for Senator Paul’s bizarre obsession with former President Clinton and events that took place nearly two decades ago. Primarily, it is quite obviously an effort on his part to appeal to the hard right base of the GOP, which is obviously quite ready to resume the Clinton Derangement Syndrome of the 90s once the time comes that Obama Derangement Syndrome becomes passe. The idea that this has anything to do with the “War On Women” only makes sense if you view it through that lens. In the end, while it may help Paul appeal to the hard right there’s simply no way that stuff like this is going to improve the GOP position with women. 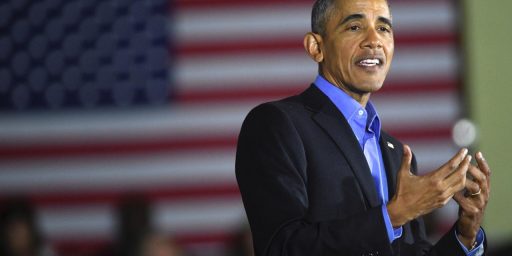