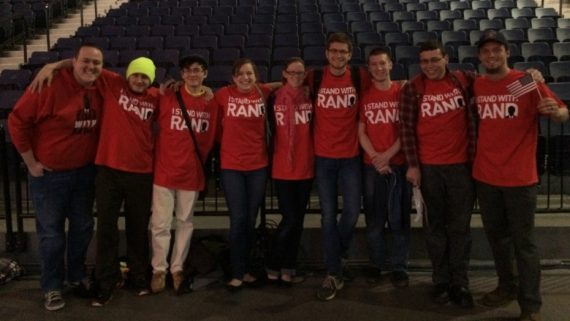 A group of Liberty University students managed to get in some rather epic trolling at Ted Cruz’s speech today:

LYNCHBURG, Va.—Sen.  Ted Cruz took the stage to declare his presidential candidacy at Liberty University Monday, surrounded by upwards of 10,000 cheering students. They weren’t all here by choice.

Attendance at convocation at Liberty is mandatory, and a group of students clad in “Stand With Rand” shirts sat center stage—directly in view of the cameras—to log their displeasure with having to be here.

“Of course, you want it to appear as if you have a large audience,” said Eli McGowan, who organized the not-so-subtle protest. “We felt like if we didn’t wear shirts showing our true political preference then the media might think we all supported Cruz.”

“They make you come. If you don’t come, you get punished,” said Ana Delgado, a sophomore, who said students face a $10 fine for not showing up at convocation. Delgado wasn’t among those wearing Paul gear. She is undecided about who she’ll support in 2016, but she didn’t like being forced to be part of Cruz’s announcement.

After Cruz finished his speech, the red-clad cohort of Paul supporters wandered over toward the media section and lingered for press interviews. Lee Showalter is a 22-year-old Liberty student and a member of Young Americans for Liberty, a group that grew out of Ron Paul’s failed presidential campaigns. He said he showed up in Rand gear to “just show solidarity.”

“Ted Cruz is nice,” Showalter said. But he thinks Paul would make “a better president.”

Christopher Cromwell, a 20-year-old sophomore sporting a “Stand With Rand” shirt, said he was planning to volunteer for Paul’s campaign and didn’t want to “make it appear as though all the students supported Cruz.”

Several of the students managed to get seating that put them right in the camera shot for C-SPAN: 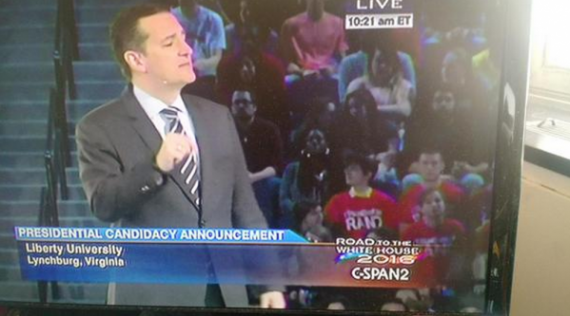 For those wondering, Cruz made his speech at Convocation, which is a weekly event at Liberty which all students are required to attend, but this appears the first time in awhile where the event had a purpose that was so explicitly biased in favor of an ongoing political candidate.

In any event, good way to fight the power kids.