Michele Catalano worries that Friday’s Ronald Reagan memorial would be an ideal terrorist target, “All those people gathered in one place, on the 11th of the month. . . .”

Presumably, so is the Secret Service, since they’ve taken charge of event security: 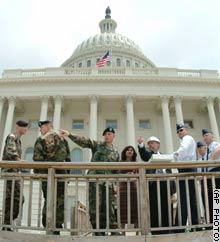 The Department of Homeland Security has designated all the activities in California and Washington related to Reagan’s memorial a special security event, which makes the Secret Service the lead agency for overseeing precautions.

“We are confident we can provide a safe and secure environment,” a Secret Service spokeswoman said.

Among the other events with the same designation are the G-8 economic summit this week on Sea Island, Georgia, and the upcoming political conventions.

Officials suggested several of the measures planned for those events — including sharpshooters, bomb-sniffing dogs and undercover police roaming the crowds — will be employed at the funeral events.

One cause for concern is that this is the first state funeral in Washington in more than 30 years, with a number of world leaders attending.

Another is the warning from the Justice Department and FBI that al Qaeda would like to attack the United States in the next few months. (Full story)

Among the activities that will have to be secured are the funeral procession Wednesday from Andrews Air Force Base to the Capitol, the transport of the casket Friday to the National Cathedral and the service there.

There is expected to be tight security when thousands of people enter the Capitol Rotunda Wednesday night and Thursday to view the former president’s casket lying in state.

In California, the state highway patrol and local police are assisting the security effort.

The Secret Service helped oversee the unprecedented security at last month’s dedication of the World War II Memorial on the National Mall in Washington, but it was not designated a special security event.

Clearly, a major strike at this event would be a terrific coup for al Qaeda. Their modus operandi, however, has been to attack weak spots where the guard is down.