Arnold “Red” Auerbach, the most storied coach in NBA history, died Saturday of a heart attack.

Red Auerbach, the Hall of Famer who guided the Celtics to 16 championships — first as a coach and later as general manager — died Saturday. He was 89. Auerbach died of a heart attack near his home in Washington, according to an NBA official, who didn’t want to be identified. His last public appearance was on Wednesday, when he received the U.S. Navy’s Lone Sailor Award in front of family and friends at a ceremony in the nation’s capital.

Auerbach’s death was announced by the Celtics, who still employed him as team president. The 2006-07 season will be dedicated to him, they said. “He was relentless and produced the greatest basketball dynasty so far that this country has ever seen and certainly that the NBA has ever seen,” said Bob Cousy, the point guard for many of Auerbach’s championship teams who referred to his coach by his given name. “This is a personal loss for me. Arnold and I have been together since 1950. I was fortunate that I was able to attend a function with him Wednesday night. … I am so glad now that I took the time to be there and spend a few more moments with him.”

Tom Heinsohn, who played under Auerbach and then coached the Celtics when he was their general manager, remembered his personal side. “He was exceptional at listening and motivating people to put out their very best,” Heinsohn said. “In my playing days he once gave me a loaded cigar, and six months later I gave him one. That was our relationship. We had a tremendous amount of fun, and the game of basketball will never see anyone else like him.”

Auerbach’s 938 victories made him the winningest coach in NBA history until Lenny Wilkens overtook him during the 1994-95 season.

“Red Auerbach was the consummate teacher, leader, and a true pioneer of the sport of basketball,” commissioner David Stern said on NBA.com. “The NBA wouldn’t be what it is today without him.”

Auerbach’s nine titles as a coach came in the 1950s and 1960s — including eight straight from 1959 through 1966 — and then through shrewd deals and foresight he became the architect of Celtics teams that won seven more championships in the 1970s and 1980s.

“Red was a true champion and one whose legacy transcends the Celtics and basketball,” Sen. Ted Kennedy of Massachusetts said. “He was the gold standard in coaching and in civic leadership, and he set an example that continues today. We all knew and loved Red in the Kennedy family.”

Auerbach was inducted into the Basketball Hall of Fame in 1969. The jersey No. 2 was retired by the Celtics in his honor during the 1984-85 season.

“He was a unique personality, a combination of toughness and great, great caring about people,” said author John Feinstein, who last year collaborated on a book with Auerbach on the coach’s reflections of seven decades in basketball. “He cared about people much more than it showed in his public face, and that’s why people cared about him.” 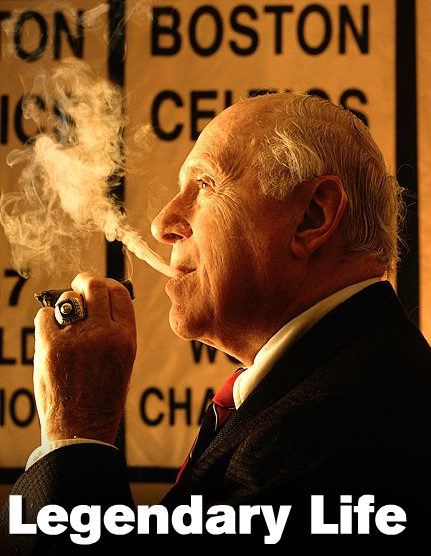 I’ve never been more than a casual basketball fan and Auerbach’s coaching era ended when I was in diapers. I have, however, heard many interviews with Auerbach and people who knew him well, like Feinstein and ex-Georgetown coach John Thompson, who briefly played for Auerbach. He was an incredibly impressive man who could have been an inspirational leader in any walk of life he’d chosen. Even well removed from his coaching days, he continued to teach and motivate. He will be missed.