Another potential scandal in New Orleans. 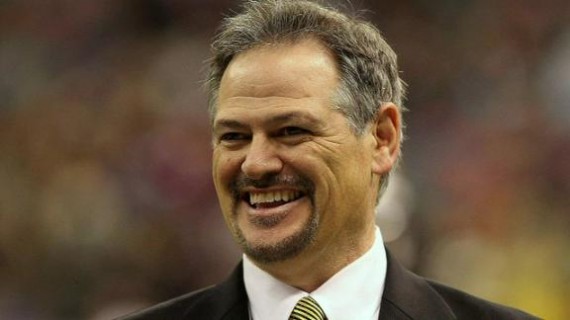 As if the just-resolved uproar over the revelation that Bryan Payton had established bounties that were paid to players who injured opposing players, ESPN is now reporting that New Orleans Saints General Manager Mickey Loomis had the ability to listen in on the conversations between opposing coaches and their assistants. This time, though, the franchise could be facing trouble not just from the National Football League, but from the United States Government:

NEW ORLEANS — The U.S. Attorney’s Office in the Eastern District of Louisiana was told Friday that New Orleans Saints general manager Mickey Loomis had an electronic device in his Superdome suite that had been secretly re-wired to enable him to eavesdrop on visiting coaching staffs for nearly three NFL seasons, “Outside the Lines” has learned.

Sources familiar with Saints game-day operations told “Outside the Lines” that Loomis, who faces an eight-game suspension from the NFL for his role in the recent bounty scandal, had the ability to secretly listen for most of the 2002 season, his first as general manager of the Saints, and all of the 2003 and 2004 seasons. The sources spoke with “Outside the Lines” under the condition of anonymity because of fear of reprisals from members of the Saints organization.

Sources told “Outside the Lines” the listening device was first installed in the general manager’s suite in 2000, when Loomis’ predecessor, Randy Mueller, served as Saints GM. At that time, according to sources, Mueller had the ability to use the device to monitor only the game-day communications of the Saints’ coaching staff, not the opposing coaches. Mueller, now a senior executive with the San Diego Chargers (he also was an ESPN.com NFL analyst from 2002 to ’05), declined to comment when contacted by “Outside the Lines.”

After the transition from Mueller to Loomis, the electronic device was re-wired to listen only to opposing coaches and could no longer be used to listen to any game-day communications between members of the Saints’ coaching staff, one source said.

The sources said when Loomis took his seat during home games, then in the front row of box No. 4 in the 300 level of the Superdome’s north side, he was able to plug an earpiece into a jack that was under the desk in front of him. The earpiece was not unlike those used to listen to inexpensive transistor radios, the sources said. With the earpiece in place, Loomis could then toggle back and forth with a switch that he controlled, enabling him to listen to the game-day communications of either the opposing offensive or defensive coaches.

Also underneath the desk in front of Loomis, said the sources, was a metal box that contained two belt packs similar to those worn around the waists of NFL head coaches during games. The packs powered the listening device available to Loomis, which was, according to sources, hard-wired to the audio feed of the opposing coaches.

The wiring setup was disabled sometime in September 2005 in the weeks after Hurricane Katrina ravaged the Gulf Coast.

As Orin Kerr notes over at The Volokh Conspiracy, Federal authorities are involved because the allegations, if true, would potentially be a violation of the Electronic Communications Privacy Act (ECPA) which makes it a crime of anyone to intentionally intercept a wired, wireless, or digital communication using any kind of electronic or mechanical device. As the ESPN story linked above notes, however, the statute of limitations for any charges under the ECPA is five years. So, if it’s true that the device was disabled at some point after the 2004 NFL season, then that would mean that neither Loomis nor anyone else involved in the alleged scheme could be charged under the statute. There is also apparently a Louisiana state law that would apply here, but the limitations period there is six years so Loomis would be immune from potential prosecution there as well. Kerr does note that the ECPA does provide for a civil remedy that could be exercised by the victims of the eavesdropping which has a two year statute of limitations that only begins to run from the time that the claimant reasonably could have known about the eavesdropping.  Theoretically, that could mean that every opponent that played the Saints at the Superdome during the 2002, 2003, and 2004 NFL seasons could potentially have a cause of action against Loomis and the Saints that could be brought anytime within the next two years. Of course, there is the not at all small matter of proving that eavesdropping took place some seven years after the system was supposedly disabled. Nonetheless, the liability issues here would appear to be not at all insignificant.

The Saints are vehemently denying this allegations, and it’s worth keeping in mind that this may all end up being untrue. Meanwhile, ESPN quotes NFL spokesman Greg Aiello as saying that the league was unaware of the allegations, although they most obviously are. One would assume that there’s going to be an internal NFL investigation of all of this as well in addition to whatever legal avenues this matter may eventually travel down. If it turns out to be true, one has to wonder if there isn’t something rotten in New Orleans.