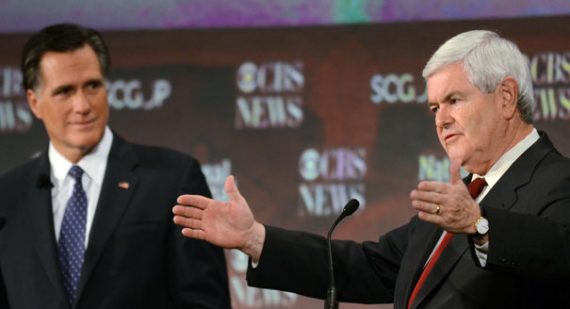 This could mean nothing, but a story making i’s way around the political world today is raising eyebrows:

Newt Gingrich held a secret meeting with Mitt Romney ahead of the Louisiana primary on Saturday, according to a news report citing an anonymous source close to the Gingrich campaign.

The two reportedly met at the hotel where Romney was staying in New Orleans. Gingrich did not deny that the meeting took place, but said there was no deal that would spur his potential withdrawal from the campaign, according to the Washington Times, which first reported the meeting.

Some are speculating that the former House Speaker is looking to leverage his candidacy in exchange for aid with campaign debt or a position in a Romney administration.

For a deal to be brokered, though, the campaigns would have to overcome what has been a tense relationship during the GOP contest. It has seemed at times that Gingrich’s sole purpose for staying in the race was to prevent Romney from winning the nomination, and the many debates from earlier in the primary season were marked by harsh exchanges between the two.

This report is also being confirmed by NBC’s Chuck Todd, although a spokesman for the Romney campaign said there was nothing unusual about the meeting and that there was nothing to read into it. Of course, he would say that, wouldn’t he?

I find it hard to believe that Gingrich would endorse Romney given everything that Newt has said over the course of the campaign, but stranger things have happened. Worth considering, though, are two facts. First, Gingrich has clearly reduced his campaign to a mere shell of its former self while at the same time saying through spokespeople that he would now be focusing his rhetoric on the President rather than his opponents. Second, Gingrich is going to need help retiring his campaign debt, and Santorum sure as heck isn’t going to be able to do that for him.