Dana Rohrbacher isn’t among those willing to cut George Bush any slack:

Former President George W. Bush is no “class act,” a Republican lawmaker insisted Wednesday. Rep. Dana Rohrabacher (R-Calif.) said Bush had “destroyed” the GOP during his eight years in office in a blunt shot at the former Republican president, who on Tuesday released his book, “Decision Points.”

The GOP lawmaker, who won reelection to his fifth term last week, was responding to another conservative on Twitter who called Bush a “class act” for avoiding criticism of President Obama since leaving office. Even in interviews supporting his book, Bush has refused to take any shots at his successor.

This shouldn’t come as a surprise. Rohrbacher has consistently been a strong fiscal conservative, and his political beliefs are rooted in 70s era California libertarianism. 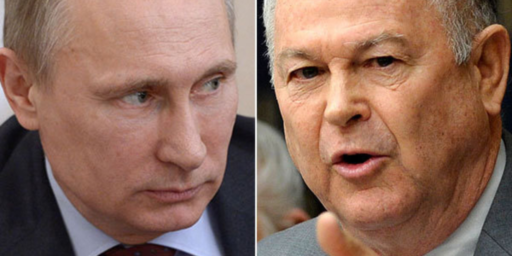