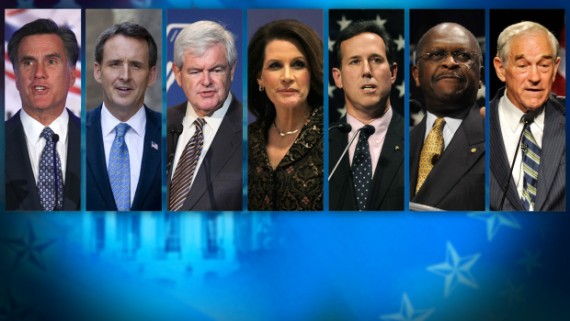 So far at least, fundraising by Republican candidates is behind where it was at this point during the 2008 election cycle:

After taking the House last November in a wave of conservative opposition to President Obama, Republicans now appear to be struggling to match the financial muscle of Democrats heading into the contentious 2012 elections.

The six GOP presidential candidates who have announced results raised a combined $35.6 million through June 30, including about $18 million by presumed front-runner Mitt Romney. In 2007, Republican candidates had raised more than $118 million by the same stage of the race, according to a new analysis from the Center for Responsive Politics.

The sluggish pace poses a serious complication in Republican efforts to unseat Obama, and suggests that GOP donors simply might be less enthusiastic than their Democratic rivals. The Obama campaign, which has not disclosed numbers, is expected to report raising at least $60 million — and perhaps as much as $80 million — in conjunction with the national party.

Republican strategists and donors attribute the depressed fundraising to a combination of factors, including a weak economy. But many GOP advisers also acknowledge that the numbers show a remarkable lack of excitement for the current Republican field, which includes two candidates — Romney and former Minnesota governor Tim Pawlenty — who have effectively been running for president since Obama was elected. Pawlenty in particular has struggled to raise money, finishing behind Rep. Ron Paul (R-Tex.) with $4.3 million.

Many wealthy GOP donors, meanwhile, have remained on the sidelines waiting to see whether another candidate such as Texas Gov. Rick Perry might enter the fray.

“Everyone is looking for Superman,” said Brian Ballard, a Florida donor who was a national finance co-chairman for the 2008 run of John McCain (Ariz.) but has not yet committed to any of the 2012 candidates. “I don’t think there is any other candidate who is going to come in and change the ultimate result, although Governor Perry could raise money.”

It is early in the election cycle, and things could change. Rep. Michele Bachmann (R-Minn.) is expected to report strong fundraising totals later this month based on her appeal among tea party voters. And a pro-Romney “super PAC” has raised $12 million in unlimited donations — money that will provide a de facto boost to his campaign.

Nonetheless, the disappointing GOP numbers come as welcome news for Democrats, who are bracing for an extremely difficult election amid persistently high unemployment and slow economic growth.

“It feels like they haven’t quite found a horse in this race,” said Jamal Simmons, a veteran aide to several Democratic presidential campaigns. “Romney is far ahead of his opponents, but he’s going to be lapped by all accounts by Obama.”

Democrats have good reason to be happy with this news because it’s expected that they’ll report a combined Obama 2012/DNC fundraising haul of more than $60 million for the recently concluded quarter sometime later this week. If nothing else, it will be spun as evidence that the Obama campaign, which will not have to worry about a primary challenge, is building up a formidable campaign warchest that, even in tough economic times, will be hard to compete against.This all could change soon enough, of course. If Rick Perry enters the race, I’d expect to see lots of money flowing his way. Additionally, if Michele Bachmann continues to rise then we’re likely to see big time Republican donors rallying behind Mitt Romney as the “Stop Bachmann” candidate. At the moment, however, it looks like President Obama is in a very enviable position.