Last night's results ensure the race will continue to the convention. 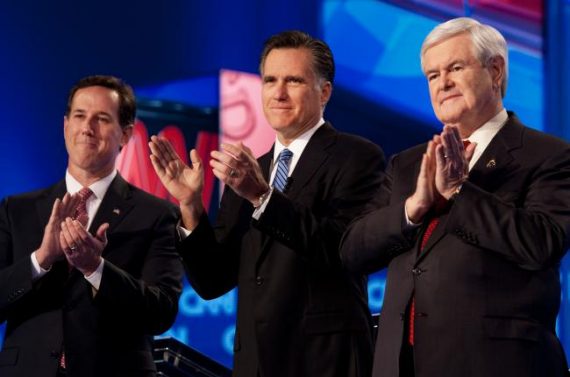 On the surface, Rick Santorum and Newt Gingrich finishing first and second in Alabama and Mississippi, with ostensible frontrunner Mitt Romney coming in a close third, is unsurprising. After all, they’re both much more appealing to rural, evangelical voters than the man Gingrich derides as a “Massachusetts moderate” who’s a Mormon. But in the wake of a series of polls showing Romney had a chance to win one or both states–with Santorum and Gingrich basically splitting the evangelical vote–it seems that way.

Tuesday’s Republican primaries in Alabama and Mississippi may be the most suspenseful so far, because the few public polls available have produced inconsistent results that collectively point to close finishes in both states.

In Alabama, three late polls show Mitt Romney, Newt Gingrich and Rick Santorum running in a three-way dead heat. In Mississippi, the final polls can’t agree on a leader, though their one common finding is that Santorum appears headed for a third place finish behind Romney and Gingrich.

My guess is that there will be little impact on the race from all of this. While a Romney win in one–or, certainly, both–of those states would have been hugely helpful, a narrow loss in both will be status quo in a day or two. It’s highly unlikely now that Gingrich will leave the race, which means the social conservative vote will continue to be split. And Romney has friendlier states ahead. (And, incidentally, won the night delegate-wise with a lopsided win in Hawaii that no one is paying much attention to.)

The NCAA tournament will likely suck up all the media attention for the next couple of weeks, meaning yesterday’s results will be off the radar screen faster than normal. And even the die-hard political junkees will soon start focusing on Saturday’s Missouri Caucus, Sunday’s Puerto Rico primary, and then primaries in Illinois and Louisiana.

After that, the calendar really starts to drag, with just two dates (albeit eight states) in April and then states voting in dribs and drabs throughout May and June–culminating in Utah on June 26.

At this point, I don’t see how anyone mathematically wraps the nomination up before the convention or see any reason why any of the four remaining candidates would drop out.