Republicans Could Win Back the House in November Emory political scientist Alan Abramowitz projects the Republicans will project 37 House seats in November, or three short of the number needed to retake the majority they lost in 2006.

The model uses four independent variables to predict Republican seat change in congressional elections: the president’s net approval rating in the Gallup Poll, the results of the generic ballot question in the Gallup Poll, a dummy variable for midterm elections that is positive in Democratic midterm years and negative in Republican midterm years, and the number of seats held by Republicans before the election.

Contrary to many other analyses, however, the results of the forecasting model indicate that the main factors contributing to likely Republican gains in November are structural and do not reflect an especially negative political environment for Democrats. The current political environment only appears unfavorable for Democrats compared with the extraordinarily favorable environment that the Party enjoyed in both 2006 and 2008. The two structural variables in the model—previous Republican seats and the midterm dummy variable—predict a Republican gain of 38 seats, half due to the small number of Republican seats prior to the election and half due to the fact that 2010 is a Democratic midterm year. According to this model, the main reasons that Democrats are likely to experience significant losses in 2010 are the normal tendency of voters to turn against the president’s party in midterm elections regardless of the national political environment and the fact that after gaining more than 50 seats in the past two elections, they are defending a large number of seats, many in Republican-leaning districts.  [Emphasis in original]

This is crucial:  Even if things were going swimmingly for the Democrats and for the economy, we’d expect the Republicans to pick up a large number of seats.  Indeed, we’d have expected a substantial correction in 2008 — reversing some of the improbable gains of Democrats in “safe” Republican seats in the 2006 midterms — if it were not an amazingly bad year for Republicans.

It’s also important to note, as does Virginia’s Larry Sabato, “the gap between +27 and +37 seats isn’t great, especially when viewed from the perspective of February. Over the next eight months, we expect the numbers in both methods of analysis to vary a bit, up or down, and eventually to converge as we approach November 2nd.”

Moreover, as Steven Taylor notes, the increasing references to 1994 are suddenly becoming interesting.   The parallels are striking if, as always, inexact.  Most notably poll numbers and incumbent retirements are quite similar. But the mere fact that there was a 1994 mitigates against a repeat because the media and the Democrats are much less likely to be caught off guard this time. 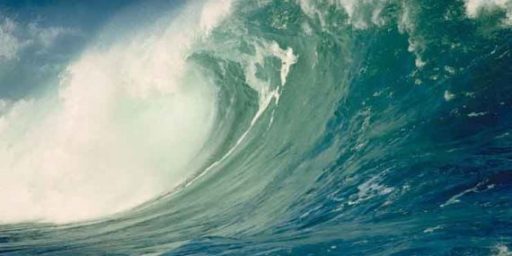