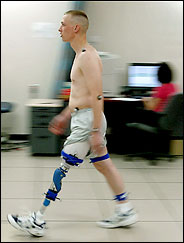 With sensors attached to his body and with eight high-speed, infrared cameras recording his movements, Sgt. Luke Wilson walked back and forth inside the gait and motion laboratory at the Walter Reed Army Medical Center. Reading the data, a computer turned him into a mobile stick figure on the screen, instantly measuring how his body is accommodating the prosthetic device that now serves as his left leg.

Sergeant Wilson, 24, an Army Ranger from Hermiston, Ore., was caught in an ambush two months ago just outside Baghdad. A rocket-powered grenade struck his leg and blew it off. He was taken to a local hospital, then to another in Germany, and then to Walter Reed, in Washington, in what has become a routine itinerary for American soldiers seriously injured while fighting overseas.

Now far removed from the front lines of military action, Sergeant Wilson and a growing number of other soldiers have shifted to the front lines of prosthetic medicine. By virtue of an unusually large population of young men and women in peak physical form who have suddenly lost a limb, in many cases more than one, Walter Reed has become one of the nation’s leading hospitals in rebuilding bodies violently torn apart. Of 675 soldiers injured in Iraq since the war began last year, about 100 have been fitted with artificial arms and legs. In any given week, about 20 of them are at the hospital in some stage of rehabilitation.

The large number of young military patients with lost limbs, combined with a generous budget for their needs, has enabled Walter Reed to set a rather lofty goal – to restore them to a physical condition that approximates what they once had. Doctors at the hospital say some soldiers have returned to active duty but that many more are returning to an active life.

“These are unique young adults who we regard as tactical athletes,” said Dr. Jeffrey Gambel, chief of Walter Reed’s amputee clinic. “They are otherwise healthy young people who have suffered devastating injuries. We use all of our energies to help them recover to whatever they want to do.”

It is not an inexpensive proposition, reflecting a cost of war that is less apparent than money spent for supplies and ammunition. Since late 2001, when hostilities began in Afghanistan, Congress has given Walter Reed an additional $6.6 million for costs associated with amputee patients, an amount that accommodates anything a patient needs or requests, including state-of-the-art artificial limbs that can cost as much as $150,000 each and are not yet available to the public. Some of the devices that are available to civilians are not covered by conventional medical insurance.

The prosthetics ward at Walter Reed is a full-service operation that provides outpatient services for months, years if necessary, after a soldier has returned home or back to duty. It includes areas for physical rehabilitation, occupational rehabilitation, a cluttered workshop where technicians assemble and adjust the devices, and the motion lab, which helps assess data to identify problems interrupting a smooth transition to use of an artificial limb. The overall workload has increased to such a degree that Congress is expected to approve $10 million for a new advanced care amputee center at the hospital.

Sergeant Wilson is, in some ways, typical of soldiers who have lost a leg above the knee. As part of his adjustment to a titanium, computer-chip driven device known as a C-leg – which costs on average about $50,000, he is trying to return to a highly active life, if not to the Army. “I’m on the fence about that,” he said about a future in the military. “My wife and I are looking at a lot of options.”

Dr. Gambel said that in the early days of rehabilitation, many soldiers say they want to return to active duty, and some do, although usually not in combat roles. But as therapy continues, a process that can take months, they often begin considering other pursuits. In any case, he said, doctors and hospital technicians provide them whatever they want – from physical and psychological therapy to new devices – to regain the active life they lost.

Amazing. Once again, it’s only a matter of time before science fiction becomes science fact.