The Other Media Bias

Andrew Cline points to a type of media bias that’s often ignored: the assumption that everyone, especially politicians, they talk to are trying to hide the truth.

Susan Q. Stranahan laments that reporters often have a difficult time accepting that motives do correspond with messages. Do politicians mean what they say, or is every message merely a political maneuver to gain advantage?

By taking it for granted “that motive never corresponds to message,” as Stranahan charges, journalists evaluate the motives of politicians as always something less than good. This attitude fails to match a more complex reality. And this failure means that journalists miss the politically useful (good for their readers) as they search for the politically expedient (bad for their readers if the former is all but excluded).

Why does this happen? It happens because journalists operate with a set of professional biases and assumptions about language that make it difficult for them to connect motives and messages. Ulterior motives may exist “between the lines” of any discourse–a locus of drama to be sure. But before it can be found there, and properly evaluated, the message in the lines (the locutionary and illocutionary acts) must be understood and evaluated. Otherwise, all that exists between the lines is so much white space.

An interesting discussion, especially if one clicks (and reads) the links in the last quoted paragraph above.

In many ways, this bias is more damaging that any ideological bias. Most news consumers are smart enough to detect liberal or conservative slants in their news–especially if the slant cuts against their own natural disposition. The natural assumption that all politicians are lying weasels who are up to something, on the other hand, reinforces the distrust for authority that is ingrained in American culture (if not human nature). The idea that people might actually espouse a particular policy because they genuinely believe it the right thing to do or that they’re resigning because they actually do want to spend more time with their family never seems to occur to reporters. Certainly, a lot of politicians have given plenty of cause for skepticism. But perhaps a little less cynicism is in order.

Supreme Court: Denial Of Trademarks Because They Are ‘Disparaging’ Violates First Amendment 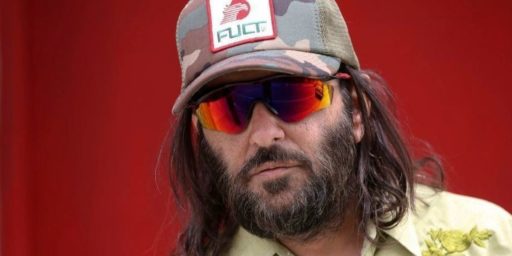