Rick Perry's campaign team is already starting to blame each other for the collapse of a campaign that isn't over yet. 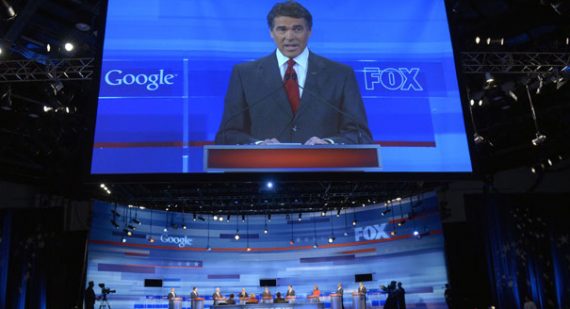 Just over 72 hours before an Iowa Caucus that is likely to be make-or-break for his campaign, Rick Perry’s Presidential Campaign seems to be writing its own postmortem:

DES MOINES — With a revamped message and a significant TV presence here, Rick Perry is hoping to revive his disappointing presidential campaign with a surprise finish Tuesday.

But even as they hold out hope that Perry can find a way back into contention, some of his advisers have begun laying the groundwork to explain how the Texas governor bombed so dramatically in a race that he seemed to control for a brief period upon his entry in August.

Their explanations for the nosedive come against the backdrop of a campaign riven by an intense, behind-the-scenes power struggle that took place largely between a group of the governor’s longtime advisers and a new cadre of consultants brought on this fall. In the end, the outsiders won out — and ever since have marginalized Perry’s longtime chief strategist while crafting a new strategy in which the Texan has portrayed himself as a political outsider and culture warrior.

In a series of interviews with POLITICO, sources close to the campaign depict a dysfunctional operation that might be beyond saving because of what they describe as the political equivalent of malpractice by the previous regime.

“There has never been a more ineptly orchestrated, just unbelievably subpar campaign for president of the United States than this one,” said a senior Perry adviser.

This is hardly the kind of thing you want to hear on the final weekend before the official start of the primary season.  There’s no doubt that Perry’s campaign has been inept at times, of course. Their failure to quickly respond to criticism over the candidates own missteps during the debates in September, and then again in November, was evident for everyone to see. The manner in which they let a candidate who’s been running for office, and winning, since the 1980s get eclipsed by a former pizza company executive with no political experience was pretty astounding. And, as a final sign of failure, the inept manner in which the campaign handled the relatively simple issue of qualifying for the ballot in Virginia was one of the worst examples of disorganization we’ve seen in quite some time. Perry entered the race in early August, later than any of the other candidates. While he was able to rise to the front of the back relatively quickly, it was fairly obvious from the start that Perry could not afford to make many mistakes. Unlike candidates who had entered the race in the spring, there would be little time for Perry to recover from embarrassing gaffes, misstatements, questions about his record, or sensationalistic stories that are bound to come out during the course of a Presidential campaign. Those candidates had the luxury of time to recover from their errors, and the fact that fewer people were paying attention to the GOP race in April and May than in August and September when attention was quickly, and glaringly directed at the Governor of Texas. When Perry wilted under the spotlight, he suffered a drop in the polls as quick and spectacular as his rise and, until a few recent polls in Iowa, there’s been no sign that he could recover.

At this point, the blame game seems to have already started, and the finger pointing between Perry’s longtime Texas allies and the national advisers he brought into the campaign a few months ago has already started:

Yet the view of the outsiders who took over Perry’s campaign is that the candidate was set up for failure by an insular group led by Dave Carney, the governor’s longtime political guru, which thought they could run a presidential campaign like a larger version of a gubernatorial race and didn’t take the basic steps needed to professionalize the operation until the candidate already was sinking.

“They put the campaign together like all the other Perry campaigns: raise a bunch of money, don’t worry about the [media coverage], don’t worry about debates and buy the race on TV,” said a top Perry official. “You have to be a total rube to think a race for president is the same as a race for governor.”

Because Perry had never been defeated in his career in state politics — and came from behind to crush Sen. Kay Bailey Hutchison in last year’s Texas gubernatorial primary — his Texas operation projected an air of supreme self-assurance and indifference to outside advice.

Running a Gubernatorial campaign in Texas is far different from running for President of the United States, and it does not appear that Perry has had the assistance of anyone equal to Karl Rove when it comes to political strategy. I’m not sure if Perry’s campaign problems came from the Texas roots of his advisers though, at least not completely. The fact that he rose to the top of the field so soon after entering the race arguably infused the entire campaign, including the candidate, with a sense of arrogance and inevitability that has been there downfall. How else do you explain the fact that Perry has been bested by the likes of Herman Cain, Michele Bachmann, and Newt Gingrich at various times over the past three months?

The other factor in all of this is, of course, the candidate. No matter how good a team of political advisers might be, there’s only so much that they can do if the candidate isn’t fully up to snuff. Recently, for example. Perry has admitted that residual pain from the back surgery he had in June has been an issue for him ever since he entered the race. Standing for long periods of time has been an issue for him. This isn’t exactly a surprise, though. When people started noticing in September that Perry seemed to be zoning out after about an hour in each of the debates in September, some in the media speculated about whether the back surgery was playing a role in Perry’s performance. The campaign quickly denied those rumors, perhaps fearing that any such admission would be seen as a sign that Perry wasn’t up to the task of running for President (of course, JFK had similar back problems while he was a candidate and President, we just didn’t know about it, or about the medication he took to deal with it). I’m not sure what the campaign could have done about this issue, but perhaps acknowledging it would have been smarter than ignoring it. Finally, of course, there’s the fact that Perry just doesn’t seem up to the task of campaigning intellectually, and unless you have a candidate willing to sit down and study briefing books there’s nothing you can do about that.

Rick Perry may yet do well enough on Tuesday night to give his campaign renewed viability heading into South Carolina (given the polls they should just bypass New Hampshire entirely at this point), but if this is how things are going inside Perry HQ I’m not sure how much longer he’ll last after that.