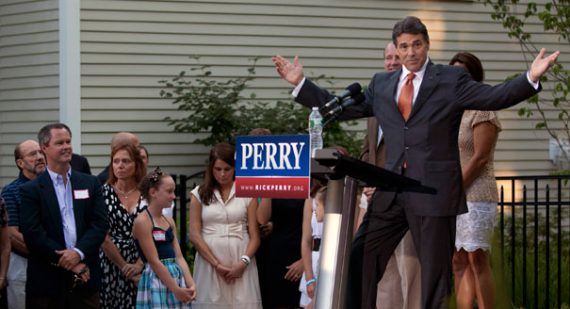 A new CNN/Opinion Research Center poll follows the lead of other recent polling from Rasmussen, Public Policy Polling, and Gallup to put Rick Perry at the top of the GOP field with a rather substantial lead:

A new national survey is further proof that Texas Gov. Rick Perry’s entrance earlier this month into the race for the White House has dramatically altered the battle for the Republican presidential nomination.

According to a CNN/ORC International Poll of Republicans and independent voters who lean towards the GOP, Perry now sits atop the list of Republican presidential candidates, with strong support from most demographic groups.

The survey, released Monday, indicates that 27 percent of Republicans nationwide support Perry for their party’s nomination, with former Massachusetts Gov. Mitt Romney, who’s making his second bid for the White House, at 14 percent. Former Alaska Gov. Sarah Palin follows at ten percent, with Rep. Michele Bachmann of Minnesota and former New York City Mayor Rudy Giuliani at nine percent, and former House Speaker Newt Gingrich and Rep. Ron Paul of Texas, who’s making his third bid for the presidency, at six percent. Every one else listed on the questionnaire registered in the low single digits.

Take Palin and Giuliani out of the mix and listing only the announced candidates, and the poll indicates Perry with 32 percent support, followed by Romney at 18 percent, Bachmann at 12 percent, Gingrich at seven percent, Paul at six percent, and everyone else in the low single digits.

Looking at the poll internals (PDF), one finds the same thing that exists in the other poll rests, a massive shift of Tea Party support to Rick Perry:

Rick Perry is now the clear leader in the Republican field. Whether this lasts depends, at least initially, on how the next month goes. Starting next Tuesday, there will be five debates and six events at which all or most of the declared candidates are scheduled to appear. How Perry fares in these forums, which will be the first introduction many Americans will have to him, will likely define the next several months of this race. As it stands now, though, this is Rick Perry’s race. Mitt Romney is running from behind, just as he was in the closing months of 2007 and January 2008. Whether he catches up again depends largely on how the public perceives Perry after being exposed to him, and whether Romney tries to take him on at all.