Rick Perry’s Military Service Will Be Largely Meaningless In 2012 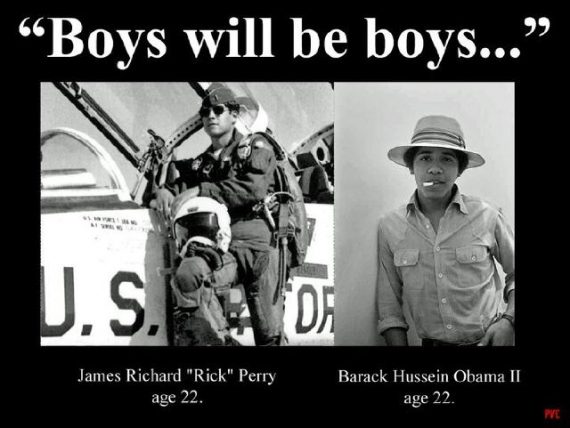 Politico’s Maggie Haberman  notes that the above picture, which purports to contrast what Rick Perry and Barack Obama were doing in the early years, is apparently circulating among conservatives and comments:

David Limbaugh, the conservative author and brother of Rush, tweets an imageyou’re likely to see again.

Perry spokesman Mark Miner emailed this response: “A picture is worth a thousand words.”

As we reported recently, Perry himself also questioned on the stump the fact that Obama had never served in the military.

As it turns out, Obama is not 22 in the picture on the upper right. That picture was taken when Obama was was student at Occidental College, which he left in favor of Columbia University in 1981 when he was only 20.

Putting that aside, though, I would think that recent history would make it clear to Republicans that making a culture war argument like this isn’t really going to get them anywhere:

And then, of course, there’s 1980: Ronald Reagan (served stateside doing films for the military) beats Jimmy Carter (Naval Academy graduate and submariner). If Rick Perry is the nominee, he’s not going to beat Obama because he flew C-130’s back in the the 1970s.