Break out the sweater vests, Rick Santorum is getting ready to enter the race for the Republican Presidential Nomination. 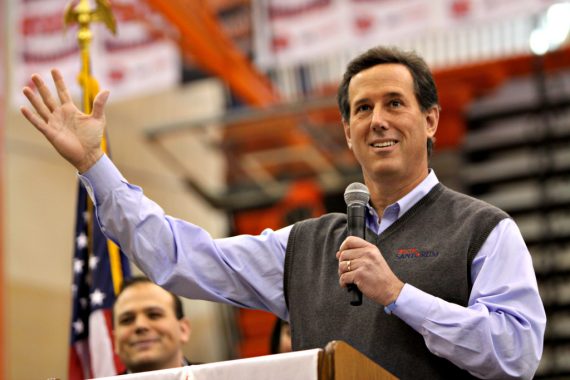 Former Pennsylvania Senator Rick Santorum, who ran a surprisingly strong, albeit ultimately doomed, campaign for the Republican Presidential nomination in 2012 is set to announce his intentions regarding the 2016 race at the end of this month, and it’s apparent that he will be announcing at that time that he’s entering the race:

Rick Santorum will announce whether he will make a run for president later this month at an event in his hometown of Butler, Pennsylvania, on May 27.

“Look, it was a great campaign last time,” he told Fox News’ Greta Van Susteren on Wednesday night, referencing his 34-vote victory in the 2012 Iowa Republican caucus. “We were clearly the underdog and we are starting out as looking at this race and we would be in the same position. And so we are very comfortable there.”

Santorum said he is looking at a venue in the town approximately 35 miles north of Pittsburgh “to sort of talk about what it was like growing up there and where America needs to go in the future.”

The former Pennsylvania senator made his 2012 announcement in Somerset, Pennsylvania — an hour and a half east of Pittsburgh and near where his grandfather worked as a coal miner.

While Santorum did not specifically say that he is entering the race, NBC News has confirmed that he will indeed be entering the race on May 27th. Santorum already has the bare bones of a campaign website up and running, although the only thing it is doing right now is accepting donations and RSVP’s for the May 27th announcement, so that’s a pretty clear indication of what his intentions actually are. Additionally, as I have said before when candidates have made these announcement that they are going to be making an announcement, such as when Ben Carson and Mike Huckabee did it in April, it’s rather obvious that when a potential candidate schedules an event such as this that they are intending to enter whatever race it is they might be considering. Additionally, it hasn’t been exactly been a secret that the former Senator has been considering another White House bid. As early as December of last year, it was apparent that Santorum was gearing up for another Presidential bid. Since then, he was reportedly been spending time in Iowa, where he pulled off the surprise victory that briefly catapulted him to political stardom before he was unable to follow up that win with anything impressive in South Carolina, Nevada, or Florida, as well as other early primary states.

Ordinarily I suppose, Santorum would be considered a serious contender for the nomination. He did, after all, finish second to Mitt Romney in both the number of total votes won and the number of actual primaries or caucuses won. That becomes a somewhat less impressive accomplishment, though, once you realize that Romney  won roughly 10,000,000 votes and 37 states while Santorum received less than 4,000,000 votes and came in first in just 11 states while gaining second place in 15 others and third place in the final 17 contests. and that Newt Gingrich was only 1.2 million votes behind Santorum in popular votes.  (Source) In addition to the fact that Santorum’s claim to be the Republican “next in line” is rather dubious given the results in 2012, the biggest impediment to his claim on that status lies in the fact that his appeal is largely limited to evangelicals and social conservatives. Unlike previous Republican “heirs apparent,” there is no evidence that the Pennsylvania Senator would have much crossover appeal among other wings of the party the way candidates like Reagan, Bush (both 41 and 43), McCain, and Romney did when they ran. Given that, a Santorum 2016 campaign is likely to look very much like his 2012 campaign did, and be just as unsuccessful.

The polls seem to confirm the fact that Santorum is unlikely to be able to capitalize on his 2012 success. Nationally, his polling average of 2.0% puts him at the back of the pack along with potential but as yet undeclared candidates such as Rick Perry, John Kaisch, and Bobby Jindal. In Iowa, where Santorum spent the better part of a year campaigning in an effort that brought him his most significant victory in 2012, he is also stuck at 2.7%, at the back of the pack with a number of candidates that likely have no chance at all of breaking through. In New Hampshire, where Santorum came in fourth behind Romney, Jon Huntsman, and Ron Paul, the former Pennsylvania Senator is at the bottom of the pack with a polling average of 1.7%, which is not surprising considering that the Granite State has few of the evangelical voters that Santorum appeals to. South Carolina was more fertile territory for Santorum last time around, since he came in third behind Newt Gingrich and Mitt Romney, but even there is again polling at the back of the pack with a polling average of 2.0%. Finally, while Santorum came in third in Florida in 2012, he is apparently drawing so little notice in the Sunshine State now that his name isn’t even included in the polls.

What all these polls show, of course, is that whatever momentum Rick Santorum may have had in 2012, it has not followed through to the 2016 campaign cycle. In no small part, this is due to the fact of his limited appeal. Unlike the 2012 race, this time around Santorum will be competing for the evangelical and social conservative vote with a number of candidates, including Mike Huckabee, Ted Cruz, and Ben Carson and, to some extent, Marco Rubio and Rand Paul. In that kind of environment, it’s hard for a candidate like Santorum to make a mark, especially when he’s running against people who have been far more active in electoral politics over the past three years than he has. So, while anything’s possible, I wouldn’t expect a repeat of Santorum’s 2012 performance. But, hey, at least the sweater vest industry will benefit.