With the recounts over we can officially say that Rick Scott will be the next Senator from Florida. 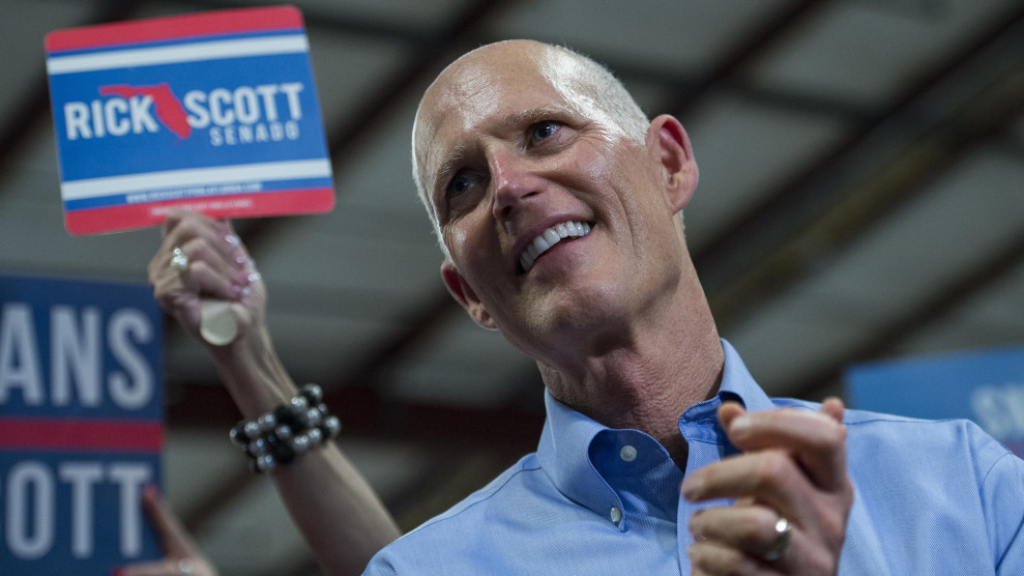 MIAMI — Gov. Rick Scott became Florida’s next senator on Sunday, a feat delayed by a grueling 12-day recount that arrived at the same inexorable truth that emerged deep into election night: Mr. Scott, a Republican who entered the public arena only eight years ago, has become a formidable political force.

After all the vote-tallying, accusation-trading and lawsuit-filing, Mr. Scott’s Democratic opponent, Senator Bill Nelson, accepted defeat once a manual recount showed him still trailing, by 10,033 votes out of more than 8.1 million cast.

Mr. Nelson’s concession brought Florida’s turbulent midterm election to its long-awaited close after a statewide recount did nothing to alter the race’s outcome, other than narrow the margin between candidates in the profoundly divided state.

“Now the campaign truly is behind us, and that’s where we need to leave it,” Mr. Scott, who attended orientation on Capitol Hill last week, said in a statement on Sunday. “We must do what Americans have always done: come together for the good of our state and our country.”\

His Senate victory was a relief not only to Mr. Scott but also to national Republican leaders who had feared that their supporters’ morale would plummet if, on the heels of a fairly dismal Election Day for the party, an apparent victory turned into one more loss.

President Trump has declared the midterms a great Republican success, but strategists within the party view the cycle as something of a disappointment, after hopes of gaining as many as four Senate seats dissipated with late victories by Democrats in Montana and Arizona.

For now, Republicans will savor another victory by Mr. Scott, who has mastered the ability to eke out wins. No politician in the state’s recent history has as enviable a record: Mr. Scott is unbeaten in three consecutive statewide contests, two for governor and one for senator.

Behind Mr. Scott’s victories lies his vast personal wealth. He and his wife, Ann, put more than $70 million into his first campaign for governor and nearly $13 million into his second; this year, Mr. Scott spent more than $50 million on the Senate race. But as a candidate, Mr. Scott, who is not known for his charisma, did more than just open his checkbook: He campaigned incessantly and stayed relentlessly on message, casting Mr. Nelson as a do-nothing has-been who had to be retired.

Mr. Nelson admitted in a concession statement that “things worked out a little differently” than he had hoped.

“I by no measure feel defeated, and that’s because I’ve had the privilege of serving the people of Florida and our country for most of my life,” he said. “To all Floridians, whether you voted for me, or for my opponent, or you didn’t vote at all, I ask you to never give up this fight.”

He did not mention Mr. Scott by name.

Though Mr. Nelson, 76, was a three-term incumbent from Orlando, he had less name recognition than Mr. Scott, 65, a multimillionaire former hospital executive from Naples. Mr. Scott made much of his wealth leading the Columbia/HCA hospital chain, which during his tenure was fined $1.7 billion for Medicare fraud, an issue that forced him out of his job.

Mr. Nelson, a centrist who was first elected to the State House in 1972, was not particularly exciting to the increasingly young, progressive Democratic base, and he never quite seemed comfortable seizing the spotlight.

With the denouement of Mr. Nelson’s political career comes the end of the era of Democratic moderates who knew how to win in Florida, a state now as polarized as the rest of the country. Even his Republican counterpart in the Senate, Marco Rubio, bid Mr. Nelson farewell with glowing praise. Mr. Rubio backed Mr. Scott, though the men have never been especially close.

“No two senators from the same state had a better working relationship than the one Senator Nelson and I had,” Mr. Rubio said in a statement. “I will miss working with him very much.”

During the campaign, Mr. Scott carefully distanced himself from Mr. Trump in an election that turned heavily on voters’ dislike for the president’s administration. Over the course of his eight years as governor, he also tempered his Tea Party conservatism somewhat, shifting to support more moderate measures on guns and immigration. But he embraced Mr. Trump’s bombastic style after Election Day, when it came to claiming rampant fraud nobody could prove.

The final numbers after the hand recount show little change from where things have been all along. Senator-elect Scott received 4,099,505 votes (50.05%) while Senator Nelson ended up with 4,089,472 (49.93%), for a difference between the two candidates of 10,033 votes, representing a difference of 0.12 points. (Source) This is a slight improvement in Nelson’s favor from where things stood after the initial count after Election Day and the machine recount that was concluded late last week. Despite that improvement, it wasn’t nearly enough to bring the race any closer for Nelson who had won by expanding margins in 2000, 2006, and 2012 but who obviously could not overcome Rick Scott, who had advantages both in terms of a personal fortune he was willing to spend on winning a Senate seat and in terms of his personal popularity after eight years as Governor.

With Scott’s win, the Republicans have picked up four Senate seats in the just-concluded midterms, picking up seats in North Dakota, Missouri, and Indiana in addition to Nelson’s seat in Florida. By contrast, Democrats managed to flip two Republican seats, Dean Heller’s seat in Nevada and the seat being left open by Jeff Flake in Arizona. By the current count, this gives them a 52-47 margin in the Senate with the one undecided race being the Special Election in Mississippi between former Secretary of Agriculture Mike Espy and Senator Cindy Hyde-Smith, who was named to replace Senator Thad Cochran when he retired in April. That seat’s fate will be decided in a Special Election at the end of the month and, depending on the outcome the GOP’s majority will have either increased to 53-47 or 52-48. Given the extent of the losses that the GOP suffered in the House and at the state level, this is a fairly good outcome but not unexpected given the favorable Senate map that Republicans faced heading into the year. In any event, it means that the GOP will maintain control of the upper chamber at least through the 2020 election and perhaps beyond that depending on how the 2020 election goes. Scott’s win also means that, pending the outcome in Mississippi and with the exception of Senators Kaine and Warner in Virginia and Doug Jones in Alabama, in January the GOP could control every Senate seat in all but two of the states of the Confederacy.