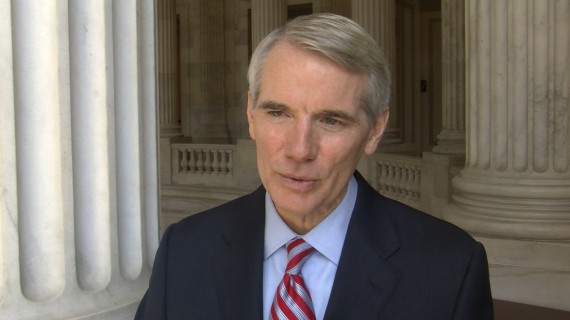 With the midterm elections over and 2015 around the corner, the time for people who are thinking about running for President in 2016 has begun, and one name that seems to be entering the conversation is Ohio Senator Rob Portman:

Rob Portman is mapping out a possible presidential run, creating a narrative, talking to fundraisers and looking to change his image from the senator who once ran George W. Bush’s budget office to the anti-Obama from Ohio with a serious resume.

“I probably have more experience than other people who are running or thinking about running,” he said. The first-term senator and policy wonk could run as a sort of anti-Obama — a swing state pragmatist with a loaded resume.

Portman certainly wouldn’t run as an outsider. He embraces his previous White House experience having worked for both Bush administrations. He went so far as to point out his executive branch background is both foreign and domestic.

He traveled overseas as counsel to the 41st president and later served as the U.S. Trade Representative under the 43rd. He worked in the legislative affairs office of the elder George Bush and was budget director for his son, developing relationships on Capitol Hill that span decades. His experience could also make a bid difficult in a GOP primary. Portman ran the White House budget office in t years when tax cuts and war spending spun up government spending and added to growing deficits.

But his time in Washington is certainly a not-so-subtle counterpoint to that of President Obama, who clocked just two years, a month and six days in Washington before announcing his intention to run it — and the country.

Following President Obama’s “flash,” as some Portman confidants describe it, the Ohioan would be the prototype of substance and competence. Next to hostility — witness New Jersey Gov. Chris Christie shouting “sit down and shut up” to a heckler just before Election Day — Portman offers civility.

Like many of the people who are likely to flirt with the idea of running for President, though, Portman would face the same problem other candidates face, namely the fact that as qualified as he might seem on paper a lot of people don’t know who he is:

Purveyors of conventional wisdom in Washington don’t dispute his qualifications or likability, but they dismiss the 58-year-old Midwestern lawyer as not electrifying enough to galvanize voters across the country. Supporters say he could be a foil to Obama. But they have also worked to alter the “boring” perception by sending Portman out to kayak and bike-ride in some of his recent media interviews. (He agreed to lunch on the lip-smacking ribs with this CNN reporter.)

Perceptions can be a problem, but voters have to know you exist. Portman acknowledges that gaining attention would be his first obstacle.

“I’d be an asterisk in the polls,” he said, adding that the national primary debates are his only chance to prove himself. Debates could be key for Portman. He was considered a top-notch stand-in twice for President Obama, as well as John Kerry and Al Gore in debate prep during the last four presidential elections.

Portman says he has a national network of donors that could keep his campaign afloat until debate season arrives. The downside is the Republican National Committee has already pledged to limit the number of sanctioned debates.

It wasn’t lost on Portman’s boosters that one of his contemporaries at the Republican Governors Association, Chris Christie, took a victory lap the morning after the election by appearing on all five of the network morning shows to claim credit for a Republican romp of statehouses coast-to-coast.

Portman, too, has connections nationwide. Wearing one of Cincinnati’s infamous Montgomery Inn bibs in front of a plate of pork, poultry and Saratoga chips, the senator said he’s sent the restaurant’s ribs all over the country. He’s also sent cartons of the Oprah-approved Cincinnati Graeter’s ice cream around the United States, most recently to Maine, for the enjoyment of the greater Bush family.

Those connections come not only from his White House service or his vetting two years ago as a potential running mate to Mitt Romney, but from his recent vice chairmanship of the National Republican Senatorial Committee. He was charged with fundraising for the competitive Senate races, but had a heavy hand in recruiting and counseling the top candidates who shocked the political world by swamping Democrats early this month.

As noted, Portman has been mentioned as a Vice-Presidential running mate in the past, most prominently in 2012 but also, albeit briefly, in 2008 and he has served as the stand-in for President Obama during debate practice for both John McCain and Mitt Romney, and his time in the White House, and the Senate, has certainly added to his resume. He also happens to be one of the handful of Republican Senators who has endorsed same-sex marriage, which in and of itself would make his presence in the 2016 field interesting regardless of how things play out at the Supreme Court between now and then. At the same time, it’s hard to judge what kind of candidate he’d be since, even as a Senator, he’s not been out of the more out-front members of that body in the way that, say, Rand Paul or Ted Cruz have been. That’s not necessarily a bad thing, of course, but it does mean that, at least initially, he’d have a hard time breaking through the “Who is that guy?” questions that most potential voters will have about him. All of that being said, Portman could potentially be an interesting candidate, and the fact that he is from a must-win state is certain to raise interest in his potential candidacy in some quarters.