Romney Campaign Required Campaign Tweets To Be Approved By 22 People

Clearly, the Romney campaign didn't get the point of social media. 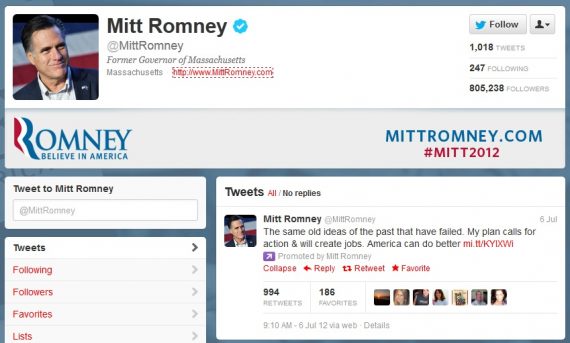 According a new study on how Twitter was used during the 2012 Presidential campaign, Mitt Romney’s campaign required every tweet sent out on the campaign’s account to go through a process that required the approval of 22 people:

Talk about too many cooks in the kitchen: Mitt Romney’s 2012 presidential campaign near the end of the race needed upwards of 22 people to sign off on a social media post before it could go live.

That’s one of the findings in a new paper released Friday by University of North Carolina journalism professor Daniel Kreiss, who studied how both Romney and President Barack Obama used Twitter, Facebook and other online tools to shape their campaign messages.

“So whether it was a tweet, Facebook post, blog post, photo—anything you could imagine—it had to be sent around to everyone for approval. Towards the end of the campaign that was 22 individuals who had to approve it,” Caitlin Checkett, the Romney campaign digital integration director, told Kreiss. “The digital team unfortunately did not have the opportunity to think of things on their own and post them. … The downfall of that of course is as fast as we are moving it can take a little bit of time to get that approval to happen.”

By contrast, Kreiss writes that Obama digital director Teddy Goff and his team of four social media staffers “had significantly more autonomy” to quickly respond to fast-breaking campaign events. For example, Obama’s campaign quickly responded to Clint Eastwood’s empty chair speech at the Republican National Convention by posting on Twitter a picture of Obama seated in the White House, with the message “This Seat’s Taken.” The post got almost 60,000 retweets, more than 23,800 favorites and was cited in a variety of media reports.

Given the fact that social media can often be a double edged sword for politicians and for profit businesses alike, the idea of someone in authority having at least some supervisory control over the process makes sense, of course. However, there is obviously a line between adequate supervisory control and needless, stupid bureaucracy. In this case, it would seem like the Romney campaign ended up handcuffing its social media team to such an extent that it was missing the point of the medium completely, and hampering the ability of those responsible for it to react to breaking news events in the way that one needs to in order to run an effective social media campaign. The Romney campaign’s approach, obviously, was far too bureaucratic and top heavy for the kind of media involved and that seems to have had an impact on its social media response team, which was nowhere near as effective as Romney during the course of the General Election campaign in 2012. The irony of this, of course, is that one of the supposed selling points of Romney as President was his management savvy as learned in the business world. While the idea of a tightly controlled social media campaign does have the feel of something you’d see out of corporate America, it hardly fits the image of Romney as path breaking funder of entrepreneurial genius that Republicans were trying to sell during the campaign. Instead, it looks like all the same tired, old, out of touch Republican campaigns that we’ve seen in the past. Given the ultimately results of the election, that may not be entirely surprising.

If anything, social media sites like Twitter have become an even bigger deal in campaigning since 2012 as a means of communicating both with supporters and with the wider world. In some cases, they may be the primary means by which some voters, particularly younger ones, have contact with a campaign, or at least the medium through which they are likely to have that first contact. This is likely to be even more true going forward into the 2016 campaign. Some  politicians have figured out the value of social media far better than others, of course. Cory Booker won national attention for the way in which he used his Twitter account to stay in touch with the residents of Newark when he was Mayor, and often to personally respond to calls for assistance. While he obviously cannot be “Super Senator” in the same way that he was “Super Mayor,” Booker has continued to use Twitter to communicate directly with constituents and direct them to agencies or staffers who can help them with their problems. Over on Facebook, Michigan Republican Congressman Justin Amaah  has used his page to explain every vote he has taken on the House floor since he was first elected. Other candidates for office, and their campaigns, have learned to effectively use social media in other ways. In all of these cases, the common factor  has been flexibility and an understanding that you can’t run a social media account by committee the way the Romney campaign apparently tried to. Obviously, then, future campaigns, both at the Presidential and lower levels are going to need to be attuned to the pulse of social media, and be able to use it in a far more efficient and respodnsive manner than we’ve typically seen from politicians, many of whom still use it as an outlet to push press releases or photos of their campaign appearances. More importantly, they are going to have to be much more flexible in how it is used than the Romney campaign was in 2012.