Romney consolidated his position as the presumptive nominee, Perry continued his disintegration, Cain discovered what it was like to be a serious candidate, and Bachmann doubled down on crazy. 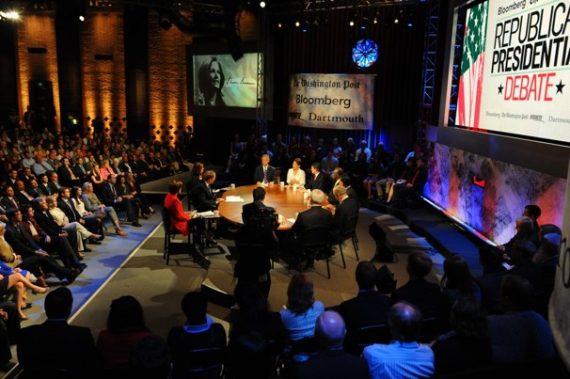 At a kitchen table economic debate last night, Mitt Romney consolidated his position as the presumptive nominee, Rick Perry continued his disintegration, Herman Cain discovered what it was like to be a serious candidate, Jon Huntsman enjoyed not being a serious candidate, and Michele Bachmann doubled down on crazy.

A comfortable and confident Mitt Romney solidified his front-runner status on Tuesday night in the battle for the Republican presidential nomination, navigating 90 minutes of tough questions on the economy from his rivals and debate moderators.

This time, the candidate with whom Romney had to share the spotlight was Herman Cain. The businessman has soared in opinion polls but faced a crush of scrutiny in Tuesday’s debate on an economic plan that he referred to again and again but that his rivals dismissed as overly simplistic and unrealistic. Cain countered that the simplicity of his “9-9-9” plan to gut the federal tax code is its virtue, and he used it to separate himself as a bold outsider in a field of politicians.

During a portion of Tuesday’s Washington Post-Bloomberg debate in which each candidate had a chance to ask another a question, four posed queries to Romney, acknowledging his position as the one to beat.

Meanwhile, Texas Gov. Rick Perry, who was looking to revive his struggling campaign, seized few moments. He stayed silent for long stretches in the debate. When asked how he would fix the nation’s sputtering economy, he said only that he would develop new energy resources. Even when pressed, he offered few specifics.

At another moment, Perry quipped: “Mitt’s had six years to be working on a plan. I’ve been in this for about eight weeks.”

In one exchange, Cain, a former Godfather’s Pizza executive, challenged Romney to name all 59 points in his 160-page economic plan, suggesting that it failed Cain’s test to be “simple, transparent, efficient, fair and neutral” in contrast to Cain’s proposal.

But the former Massachusetts governor did not hesitate to make the case that the complexity of his plan reflects the complexity of the nation’s problems, and that he has the depth of experience, business know-how and ability to deal with those problems.

“I have had the experience in my life of taking on some tough problems,” Romney said. “And I must admit that simple answers are always very helpful but oftentimes inadequate. And in my view, to get this economy going again, we’re going to have to deal with more than just tax policy and just energy policy, even though both of those are part of my plan.”

Jon Huntsman, who’s presumably smart enough to know that he’s not going to catch fire this cycle, got off the best line of the night and followed it with sensible policy suggestions:

“Here’s what we need, something that’s doable-doable-doable,” Huntsman continued during the Bloomberg/Washington Post debate in New Hampshire.

He called for phasing out “all of the corporate welfare, all of the subsidies, because we can’t afford it any longer, in a revenue-neutral fashion” and a reduction in the corporate tax rate from 35 to 25 percent.

Michele Bachmann used the same target to get off the creepiest line of the night if not the campaign.

She also had a contender for the dumbest:

Given a chance to assail Wall Street, Minnesota Rep. Michele Bachmann blamed too much regulation. She also said Obama wants to let Medicare collapse, pushing everyone into “Obamacare,” the health overhaul passed by congressional Democrats in 2010. [For those playing at home, Medicare is run by the federal government.]

And Rick Perry demonstrated that he just might not be smarter than a 5th grader.

“I don’t need 9-9-9, we don’t need any plan to pass Congress,” He called for a president to “free up this country’s entrepreneurs.”

Then there was Newt Gingrich, whose reputation as a great thinker continues to evaporate:

“If they want to really change things, the first person to fire is Bernanke, who is a disastrous chairman of the Federal Reserve. The second person to fire is (Treasury Secretary Tim) Geithner,” Gingrich said. “I think it’s perfectly reasonable for people to be angry. … And if you want to put people in jail — I want to second what Michele said — you ought to start with Barney Frank and Chris Dodd and let’s look at the politicians who created the environment.”

Michelle Malkin declares that people are looking for “a candidate with the guts, gall, and gumption to take on Barack Obama” and that “By those basic measures of fitness for office, Rick Perry once again failed to deliver. He was languid. Passive. Half-hearted. Listless. Just like he was during the 9/23 debate.”

Jennifer Rubin writes, “Mitt Romney has to be very pleased. He was smooth as silk, deflecting a question on RomneyCare, explaining the problems of community banks, and driving home the key message: He is the only candidate ready for prime time.” She adds, “More importantly, he didn’t need to dismantle Herman Cain. That happened at Cain’s own hands with some help from Rep. Ron Paul (R-Tex.), Rick Santorum and Rep. Michele Bachmann (R-Minn.) He managed to drop New Jersey Gov. Chris Christie’s name, reminding voters and press alike that this may have been his best day in the race. He even managed to get in a dig at PBS when host Charlie Rose accidentally put Santorum ahead of Romney in the alphabetical line-up for questioning other candidates. His best moment may have been in explaining his Bain experience, creating tens of thousands of net jobs and making Sports Authority, Staples and even a steel mill viable employers. If not an inside the park homerun, it was at least a stand-up triple.”

Coming off his endorsement earlier in the day by Chris Christie, Romney assumed the mantle of frontrunner and let the other candidates take on Cain, who’s the only serious contender left. More importantly, he’s already shifting into General Election mode rather than having to appease the radical instincts of the base. He’s now talking about governing, including such quaint notions as working with the opposition party, saying he would reach out to “good Democrats” to get things done as he did as governor.

The search for the Not Romney candidate isn’t over and someone else may get their turn as the top challenger. Cain is still charming and funny and Perry is still a Texan, so maybe they’re not done. But Romney is quickly demonstrating that he’s ready for the challenge of the campaign and that everyone else has a lot of catching up to do.