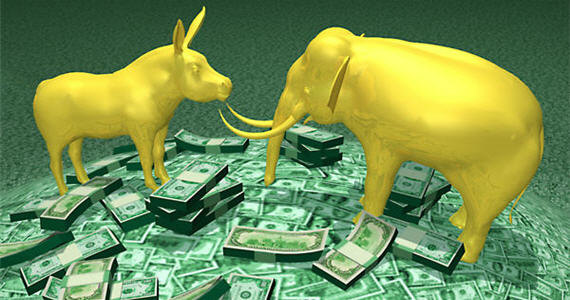 Thanks to both three months in a row in which the Romney Campaign and the RNC and the act that the Obama Campaign spent a huge amount of money on ad buys in July, Republicans ended the month with a huge cash advantage:

Mitt Romney’s cash advantage over President Obama and the Democrats more than doubled in July, as intense Republican fund-raising and heavy spending by Mr. Obama and his allies left Mr. Romney and the Republican National Committee with $62 million more in the bank than the Democrats at the end of last month.

Mr. Obama’s campaign and the Democratic National Committee spent $91 million in July, significantly more than the $75 million the Democrats raised, underscoring the investments Mr. Obama made in technology and field staff as well as nearly $40 million his campaign spent on advertising that month. While Mr. Romney continued to husband his resources for the fall — he spent less than half of what Mr. Obama did on advertising — conservative “super PACs” and other outside groups stepped into the breach, spending millions of dollars on ads attacking Mr. Obama.

Mr. Obama and the Democrats raised a combined $75 million during July, according to Federal Election Commission reports filed Monday, compared with $101 million for Mr. Romney and the Republicans. The Democrats had about $124 million in cash on hand, most of it in Mr. Obama’s campaign account, while the Republicans had $186 million.

It is not unusual for challengers to outraise incumbents late in the campaign, and while Mr. Obama is being outraised now, he raised far more than Mr. Romney through 2011 and early this year.

But Mr. Romney’s extraordinary two-month run raising money — his team has pulled in more than $200 million in June and July — makes it virtually certain that Mr. Obama will not leave the Democratic convention next month with the cash advantage he had four years ago, when he heavily outspent the Republican candidate, John McCain, on his way to victory in November. The July totals do not include what Romney campaign officials said was a boost in both small online donations and large checks after Mr. Romney selected Representative Paul D. Ryan of Wisconsin as his running mate.

Mr. Obama’s campaign has had to spend heavily on its vaunted grass-roots infrastructure, posting $3 million in payroll costs in July. Mr. Romney has begun to catch up in swing states, showing rent and utility payments in Florida, Wisconsin, Colorado, Iowa and elsewhere beyond its Massachusetts headquarters.

And this doesn’t even include the SuperPACs.

It’s worth noting that one of the reasons that Romney’s bank account has grown so large is because the campaign is forbidden by law from spending money designated for the General Election campaign until he is officially named the party nominee. After that, expect the coffers to open up.