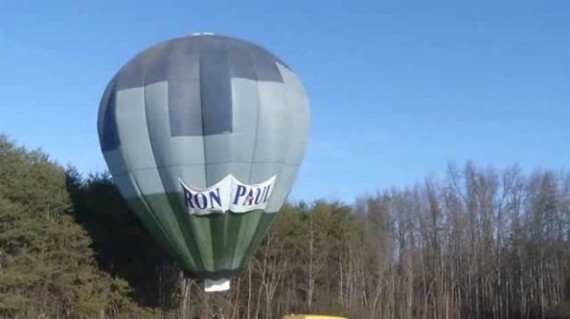 Apparently, the air war segment of Ron Paul’s South Carolina campaign hit a bit of a snag this morning:

GREENVILLE COUNTY, S.C. — It’s deflated now, but a Ron Paul hot air balloon along the side of Interstate 85 caused traffic to slow down Thursday morning.

The balloon could be seen from a South Carolina Department Of Transportation camera.

DOT officials say the balloon had Ron Paul’s name on it.

People looking at the balloon slowed down around Pelham Road in Greenville County causing a four-mile backup at one point.

SC Department of Public Safety spokesman Sid Gaulden told News 4 that the South Carolina Highway Patrol asked the operator of the hot air balloon, Remus Toppeta of Greer, to take it down because it was causing a hazard.

It’s unclear if this was an official campaign activity, or just one of Paul’s more zealous supporters. As if there’s a difference.