Last night, Ron Paul decided it was a good idea to bring back the ghosts of the Vietnam War era. 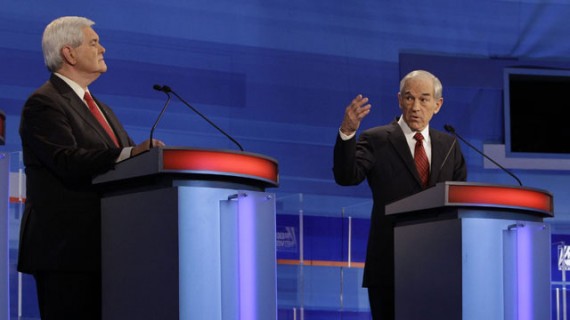 One of the odder and more emotional exchanges from Saturday night’s debate had its roots in a statement that Ron Paul made on Wednesday in which he criticized Newt Gingrich for seeking deferments from the Vietnam War era draft as a student and, later, a father:

(CNN) – Rep. Ron Paul said Wednesday that rival Newt Gingrich was a “chickenhawk” for voting to send American troops into war while never having served in the military himself.

Paul was responding to a question from CNN’s Soledad O’Brien on the program “Starting Point” about Gingrich’s assertion that the Texas congressman would be a “dangerous” candidate.

“You know, when Newt Gingrich was called to serve us in the 1960s during the Vietnam era, guess what he thought about danger? He chickened out on that and got deferments and didn’t even go,” Paul said. “Right now he sends the young kids over there and the young people come back and the ones in the military right now, they overwhelmingly support my campaign.”

Paul pointed to the number of veterans who are supporting his bid for the GOP nomination, citing their endorsement for his platform of limited American involvement overseas

“We get twice as much support from the active military personnel than all the other candidates put together,” Paul said. “So Newt Gingrich has no business talking about danger because he is putting other people in danger. Some people call that kind of a program a ‘chickenhawk’ and I think he falls into that category.”

Paul has previously criticized the former House speaker for deferments he received during the Vietman era. Paul himself served as a surgeon in the U.S. Air Force after attending medical school.

This all came to a head last night when the two men were on stage together:

MANCHESTER, N.H. — Newt Gingrich and Ron Paul engaged in a very personal exchange in Saturday night’s debate in which Paul criticized the former House speaker for not serving in the military.

Paul has repeatedly criticized Gingrich for taking a deferment during the Vietnam War, calling him a “chickenhawk” for having no problem sending young men to war despite his lack of serviGingrich noted that he comes from a military family — an “Army brat” — and said he wasn’t eligible for the draft because he was married with a child. And then appeared to get a little choked up recalling his father’s service.

“I think I have a pretty good idea of what it’s like as a family to worry about your father getting killed,” Gingrich said. “And I personally resent the kind of comments and aspersions he routinely makes without accurate information and then just slurs people with.”

Despite Gingrich’s emotion, Paul didn’t back down.

“When I was drafted, I was married and had two kids,” Paul said. “And I went.”ce.Here And Gingrich took exception to it during the debate.

The words don’t really communicate the emotion that came out in this exchange, so here’s the video:

It’s fair to say that I’m no fan of Newt Gingrich’s for many reasons. When it comes to foreign policy specifically, I’m probably closer to Ron Paul than the former Speaker in many respects, not the least of them being the wisdom of continued American involvement in Afghanistan and the proper way to respond to Iran (although I disagree with Paul’s assertion that Iran’s nuclear program is nothing to worry about). In fact, there’s not very much I like about the former Speaker of the House, and I’ve noted many times his hypocrisy on issues related to fiscal conservatism compared to his actions in the years since he left the House of Representatives.

Despite that, I’ve got to say that I find Paul’s argument here disappointing and just a little bit appalling. Whether he intended it or not, Paul’s argument involves nothing less than picking at the scab of a very old wound in American politics, one that many had thought we had left behind after the 2004 Presidential Campaign at the very latest. I’m referring, of course, to the Vietnam War and the divide that seemed to be part of American politics from the time the last helicopter left Saigon between those who had served and those who had utilized a variety of deferments to avoid the draft. In Gingrich’s case, it was student deferments and the deferment granted to men with children. Mitt Romney also utilized student deferments, as well as a deferment granted to ministers during the time he was serving as a Mormon Missionary in France. For what seemed liked decades, the question of what a candidate did or did not do during the Vietnam War would always come up and candidates like Bill Clinton and George W. Bush would find themselves being criticized for not subjecting themselves to the draft.

Paul supporters tell me that this is a legitimate attack on Gingrich because of his current foreign policy positions, which are undeniably militaristic. I’ve got to wonder, though, what relevance the actions of Newton Leroy Gingrich the 18-25 year old have on the fitness for the Presidency of Newt Gingrich the 68 year-old who happens to be running for President. Are we really going to dredge up 40-odd year old political debates in a race for the Presidency in the 21st Century? And, haven’t we reached the point where what people did during the Vietnam War should be put to rest once and for all? After all, most of the people affected by the argument are in their 60s at this point at least and the only reason it even comes up now is because we happen to have two men who were draft eligible running for President. Hasn’t the statute of limitations on the question “what did you do during the war” expired at this point? I would suggest that it has, and that Paul (who served as an Air Force Flight surgeon after being drafted in the years before Vietnam) bringing it up again was unnecessary and just a little low-class.

The Paul-Gingrich exchange also brings up another issue now that we live in the era of an all-volunteer force. Does the fact that someone has not served in the military mean that their arguments in favor of a more aggressive foreign policy stance somehow less relevant or less legitimate? While I understand the hypocrisy argument that Paul and his supporters make in this context, the only acceptable answer strikes me as being no. Whether or not someone served in the military does not make their opinions on foreign policy more or less legitimate. A veteran who advocates non-interventionism has as much right to his a opinion as does a non-veteran who advocates increased U.S. military involvement in the world. Whether the policy is wise or not depends not on the resume of the person advocating it, but on whether its objectively a good idea or not. Paul’s argument boils down to saying that only people who have served have the right to made the decision on whether or nor people should go to war, and that’s just nonsense.I’m not sure why he has gone down this route with respect to Gingrich (although interestingly, not Romney) but it’s little more than ad hominem nonsense

There’s one final part of Paul’s argument that’s puzzling. As a libertarian, one would think he would oppose the draft and support any persons lawful attempt to avoid it. After all, it was a libertarian economist, Milton Friedman, who played a pivotal role in convincing President Nixon to support ending the draft (the politics of the situation helped Nixon make that decision too, obviously). Wouldn’t someone who supports individual liberty and autonomy also support a person’s right to prevent themselves from being subjected to the whim of the state in this matter? Or is Paul just cynically using this issue for political advantage? Based on the available evidence, I think it’s the second.