Ron Artest was suspended for the rest of the season Sunday, and two of his Indiana Pacers teammates must miss a total of 55 games for fighting with fans during a melee that broke out at the end of a game against the Detroit Pistons. Overall, the NBA issued some of the harshest penalties in its history by banning nine players for more than 140 games. Artest’s suspension is the strongest ever levied for a fight during a game.”The line is drawn, and my guess is that won’t happen again — certainly not by anybody who wants to be associated with our league,” commissioner David Stern said. Indiana’s Stephen Jackson was suspended for 30 games and Jermaine O’Neal for 25. Detroit’s Ben Wallace — whose shove of Artest after a foul led to the five-minute fracas — drew a six-game ban, while Pacers guard Anthony Johnson got five games. “I’m sick about that for Indiana. I’m devastated for them,” Pistons coach Larry Brown said. “And we lost our heart and soul.” Four players — Indiana’s Reggie Miller, and Detroit’s Chauncey Billups, Elden Campbell and Derrick Coleman — were suspended one game apiece for leaving the bench during the initial fracas. All of the suspensions are without pay. Artest will lose approximately $5 million in salary, while O’Neal’s suspension will cost him nearly 25 percent of his $14.8 million salary for the current season.

Players union director Billy Hunter, calling the penalties excessive, said an appeal would be filed Monday. The union, sources told ESPN.com’s Marc Stein, can expedite an arbitration hearing three times during any given season and will request a hearing on behalf of the three Pacers as soon as possible.

I can’t imagine these sanctions will stand. While players can’t be allowed to attack fans who are harrasing them, they can’t be expected to withstand physical assaults without responding. Certainly, a multi-million dollar fine under such circumstances is beyond the power that should be allocated to a league commissioner, let alone without the benefit of due process. 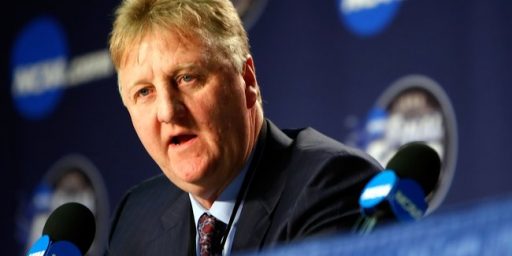