Ron Paul has officially ended his quest for the Republican nomination, months after John McCain secured enough delegates to win, and is using his war chest to start something called The Campaign for Liberty.

The new entity will be used to push a slate of libertarian-minded Republican candidates for public office in local districts nationwide, according to a description provided to ABC News by the Paul campaign. Paul also recently published a new book on his political philosophy, The Revolution: A Manifesto.

The Texas congressman’s campaign to win the Republican nomination raised about $33 million in nine months, and he and his organizers hope to reignite that grassroots support for the new organization. They’re setting a goal of raising $35 million over the next year.

Despite the dedication and moxie of Paul’s supporters, maintaining that level of interest without the vehicle of Paul’s presidential campaign could be difficult, especially given the frenetic, laissez faire interaction between Paul and his supporters through the presidential campaign. The congressman in many ways served as a figurehead, while independent actors drawn to his message did most of the organizing.

The Liberty Campaign is meant as a means for harnessing some of that energy and maintaining interest on a more micro level, by recruiting like-minded people to seek political office.

While it likely won’t generate the same buzz as his presidential campaign, this strikes me as a much more profitable use of his time and that of his followers. True libertarians are a tiny minority in American politics (indeed, it’s debatable whether Paul himself qualifies) but we have a strong libertarian strand running through our culture. It’s quite feasible that, with proper organization and funding, the Campaign could recruit small government-minded folks to run for Republican seats, especially in the West and Northeast where Evangelical Christians have less sway.

Realistically, this will have to be done mostly at the local level, working to get people elected to school boards, city councils, and state legislatures rather than prestige “national” offices. That, incidentally, is how the religious right built themselves into such a force within the GOP.

It remains to be seen whether Ron Paul, unlike Ross Perot, can build a movement without himself in the center. 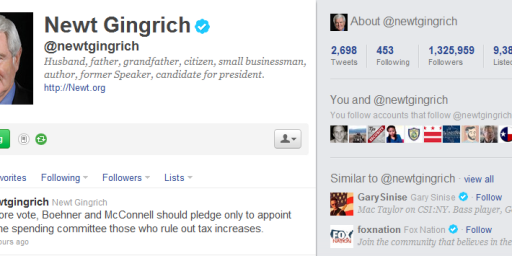