Rudy Giuliani to Drop Out if He Doesn’t Win Florida?

Rudy Giuliani is likely to end his presidential campaign if he doesn’t win today’s Florida primary, Andrew Malcolm reports for the LAT. Rudy Giuliani appears to be pondering an end to his long pursuit of the Republican presidential nomination.

In a meeting in the back of his chartered plane en route to St. Petersburg, Fla., a short while ago, the onetime, longtime GOP front-runner told a small group of reporters, including The Times’ Louise Roug: “The winner of Florida will win the nomination.” He then went on to predict he would win. And his spokeswoman, Maria Comella, said later he was speaking with confidence.

But that’s an unusually categorical statement suggesting that only a total first-place upset by Giuliani, who trails both Mitt Romney and John McCain in all major polls for Florida’s Republican primary tomorrow, will keep him in the competition, despite previous repeated vows to continue.

Giuliani’s campaign, which led in national polls when it began and stayed there for many months, is showing signs of serious financial fatigue. This month his top staffers are foregoing their paychecks so the maximum amount of money can be invested to salvage his political fortunes in the Sunshine State, which was where Giuliani’s late-state strategy was to kick into high gear.

Conversely, one could argue that Giuliani’s simply doubling down on his Florida bet, saying that if he pulls off a win there, he’s the frontrunner. He’s wrong, I think, but that’s a reasonable interpretation.

Realistically, there’s not much way he can win if he doesn’t take Florida. The polls have him trailing in his home state of New York and way behind in California. So much for a large state strategy. And if he can’t afford to run ads in his target states over the next week, he might as well quit.

Congressional Oversight is not Overreach 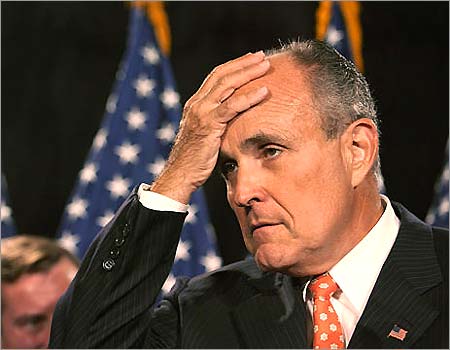