Kevin Drum has unearthed another scandal from the late 1960s that will surely shake this campaign to its foundations. Citing a blog named Slacktivist, who read on Cursor that a blogger at Bad Attitude read in the NYT Review of Books that Karen Hughes had this in a book she wrote from memory:

Ã¢€œÃ¢€˜President Putin knew you had played rugby, but he didnÃ¢€™t have the context. I mean you just played for one semester in college, right?Ã¢€™ I said, dismissing it.

Now, okay, this isn’t that big a deal. I’m not even sure it’s a little deal. But the fact is the guy played a bit of intercollegiate intramurals and he likes to tell people that it was more than that — that he played Ivy League varsity.

That’s kind of smarmy and less than admirable, but whatever.

Still, consider the kind of treatment this story would be getting if it were John Kerry, rather than George W. Bush, who was caught lying about his athletic resume.

Kevin says this “sounds about right” and notes that a magazine once lampooned Bill Clinton for taking too many mulligans.

The President of the United States George W. Bush was a member of the Yale Rugby Football Club in 1968?

I’ve heard that somewhere, yes. They also provide a photo: 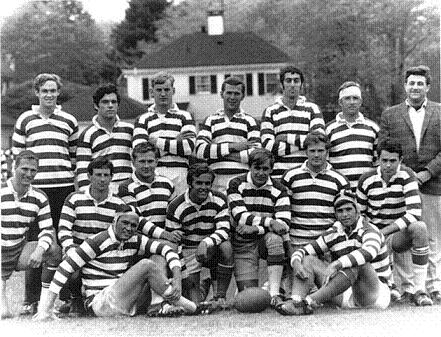 So, Bush played intercollegiate rugby at Yale. Is saying you were on “the varsity” when it was an intercollegiate club sport stretching the truth? It doesn’t appear that there’s a higher level of rugby that he could have played, so it seems reasonable enough. And, goodness, this is the Ivy League we’re talking about, anyway.

My impression of Bush’s athletic career is that he’s always been rather self-deprecating about it. I recall reading a profile during the 2000 campaign that interviewed some of the players that were on the Texas Rangers when Bush was the owner and they observed that most owners and GMs who had played any ball at all would always bring it up whereas Bush always underplayed his experience, understanding that it wouldn’t impress Big Leaguers. I couldn’t find the piece (probably in the NYT archives somewhere) but I found these on Google: SI (Sept. 03):

SI: At Yale you were a pitcher, right?

GWB: I was a middle reliever my freshman year. And I was mediocre at best. And then I went on and played rugby my senior year.

He says much the same thing to the Federation of American Scientists:

Baseball remained his favorite, but, he says, “my talent never matched my enthusiasm; I was a mediocre pitcher on the Yale freshman team. In my junior year, I was introduced to rugby, and I worked my way onto the first team for my senior year.”

Here, he terms it “the first team,” implying that he played at a lower level as a junior. And the Yale page only mentions the senior year. Maybe they only mention “the varsity”?

Jerome Doolittle (of Bad Attitudes fame) is almost certainly right on this count: “And you can take it from one who played club rugby in the sixties Ã¢€” once or twice against Yale Ã¢€” that the point wasnÃ¢€™t so much athleticism. The point was beer.” Still is, apparently.

Update: I concede Kevin’s point that Mickey Kaus is often mean to John Kerry. I’m less than persuaded, however, that the press is generally kinder to Bush than to Kerry or unwilling to harp on insignificant matters involving either. Hell, there’s a long-running Slate feature that records Bush’s verbal flubs.