Secretary of Defense Donald H. Rumsfeld held out the possibility today that U.S. investigators would eventually find weapons of mass destruction in Iraq and said he doubted the “theory” of a former chief weapons inspector that Iraq did not possess stockpiles of such weapons before U.S. forces invaded last year.

Interesting. While it’s not inconceivable that weapons will turn up–the “Saddam was duped by his minions” story still doesn’t make much sense to me–this seems an odd public position to take. So does this: 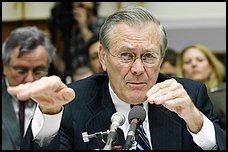 I suspect both will turn up on the late-night comedies.

Addressing the Senate Armed Services Committee for the first time since David Kay told the same panel last week that intelligence analysts were “almost all wrong” about banned weapons in Iraq, Rumsfeld defended President Bush’s decision to go to war in Iraq, and he denied that administration officials had manipulated the intelligence to justify the invasion.

But under Democratic questioning, he backed away from his assertion before the war that the administration knew former Iraqi president Saddam Hussein possessed banned weapons in the months leading up to the March 2003 invasion.

“Intelligence will never be perfect,” Rumsfeld said. “We do not, will not and cannot know everything that’s going on in this world of ours.” He added: “I’m convinced that the president of the United states did the right thing in Iraq; let there be no doubt.”

Those arguments are valid regardless of whether weapons are found.