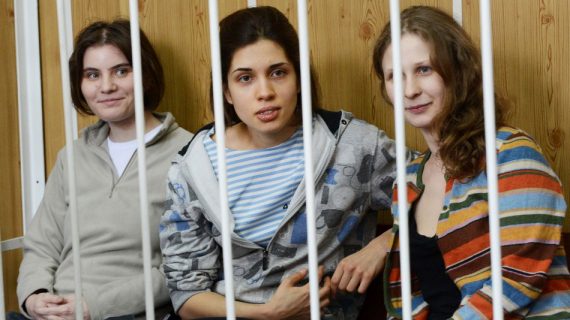 The Russian Government has released two members of the punk/protest band Pussy Riot who were imprisoned over anti-government protests at one of Moscow’s churches:

The case of Maria Alyokhina, who was set free from a prison in the western city of Nizhny Novgorod on Monday morning, and her co-defendant, Nadezhda Tolokonnikova, who was released later in the day in the Siberian city of Krasnoyarsk, had drawn international condemnation of Russia’s human rights record. Critics said their prosecution and relatively stiff sentences represented a brutal repression of free speech.

In a telephone interview on Monday, Ms. Alyokhina said that she did not want amnesty, and that officials had forced her to leave the prison. She said that the amnesty program was designed to make Mr. Putin look benevolent, and that she would have preferred to serve the remainder of her sentence.

“I think this is an attempt to improve the image of the current government, a little, before the Sochi Olympics — particularly for the Western Europeans,” she said, referring to the Winter Games Russia is hosting in February. “But I don’t consider this humane or merciful.”

“We didn’t ask for any pardon,” Ms. Alyokhina said. “I would have sat here until the end of my sentence because I don’t need mercy from Putin.” The women had been jailed since March 2012 and would have been released within the next three months.

On Thursday, hours after the adoption of the amnesty law, Mr. Putin said that he would also grant clemency to Russia’s most famous prisoner, Mikhail B. Khodorkovsky, the former Yukos oil tycoon. Mr. Khodorkovsky was released from a penal colony later that night and flown to Berlin, where he held a news conference on Sunday.

While Mr. Putin has described the amnesty law and Mr. Khodorkovsky’s pardon as efforts to make the Russian criminal justice system more humane, it has also underscored his singular authority in this country and, to critics, the very arbitrariness of the Russian legal process that rights groups have long denounced.

The two women were convicted, along with a third woman, Yekaterina Samutsevich, whose sentence was later overturned on appeal, of hooliganism motivated by religious hatred. The women had insisted repeatedly that they were motivated not by antireligious sentiment but by opposition to Mr. Putin and to Russia’s political system.

They said they had chosen the church, the Cathedral of Christ the Savior, for their “punk prayer” to criticize the political support for Mr. Putin and the Kremlin shown by the patriarch of the Russian Orthodox Church, Kirill 1.

The Russian Parliament, at Mr. Putin’s direction, passed the sweeping amnesty law last week, and the legislation was also expected to bring the release of the Greenpeace activists recently arrested while protesting oil exploration in the Arctic.

Others who stand to benefit from the law include defendants accused of crimes in connection with an antigovernment protest that turned violent after Mr. Putin’s re-election as president.

The members of Pussy Riot, the Greenpeace activists and Mr. Khodorkovsky had all become international symbols for critics of the Russian system, and could well have been the subject of protests and demonstrations during the Winter Olympics, which will be held in the southern Russian city of Sochi.

It is not clear, however, whether Mr. Putin was motivated by the Olympics or some other factors.

Given the fact that Russian in general and Putin in particular were already facing bad press and international condemnation for the nation’s sweeping anti-gay laws as well as his clearly arbitrary detentions of political opponents, it seems rather obvious the the upcoming Olympics are at least part of the motivation for recent moves out of Mosow. Indeed, I’d expect to see more moves like this as the start of the Olympics gets closer.