Unsurprisingly, Russia has now recognized the independence of Georgia’s breakaway provinces of Abkhazia and South Ossetia:

President Dmitry Medvedev has declared that Russia formally recognises the independence of the breakaway Georgian regions of South Ossetia and Abkhazia.

The move follows a vote in both houses of parliament on Monday, which called on Moscow to recognise the regions.

The move, in defiance of a specific plea from the US president, provoked a wave of protest from Western countries.

Is there a phrase for the opposite of a rubberstamp? It was rather clear the other day that the non-binding resolution of recognition passed the other day by the Federation Council and the Duma was an indication of what the leadership wanted them to do.

Sweden’s foreign minister Carl Bildt has characterized the move as “a policy of confrontation”:

That the Russian leadership has chosen this path means it has chosen a policy of confrontation not only with the rest of Europe but also with the international community as a whole.

The decision means that Russia has now opted for a route which will have far-reaching consequences for a long time to come.

Gazeta.ru offers the opinion that Russia is merely doing what it must to preserve the peace (and blames the whole thing on the U. S.). 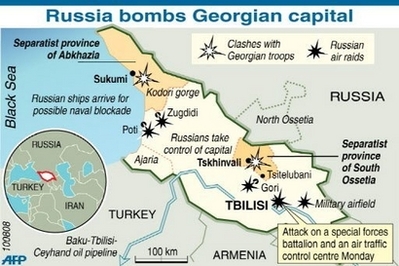