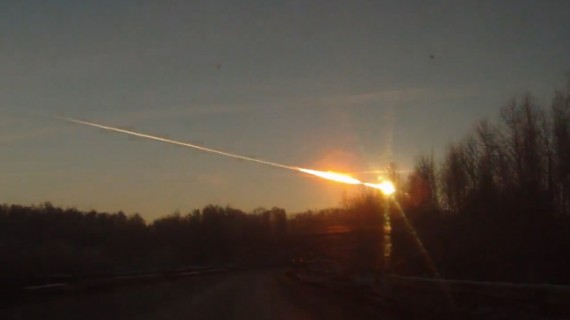 The meteor that exploded across Central Russia last week was much bigger than initially thought:

It turns out the meteor that landed in Russia last week was a bit bigger than the 10 tons first reported. About 1,000 times bigger.

When a hunk of rock raced out of the morning skies over Russia on Friday and exploded with nearly 500 kilotons of energy, early size estimates from the Russian Academy of Sciences that were carried by the Associated Press, Reuters and other news wires pegged it on the small size, with a weight of about 10 tons.

Later in the evening, after studying infrasound data from stations around the world, NASA released a new estimate revising that first guess upward by a thousand-fold: The meteorite actually weighed closer to 10,000 tons, scientists said — approximately as much as 170 M1 Abrams tanks.

“My guess is that someone eyeballed the videos and made an educated guess,” said Margaret Campbell-Brown, associate professor in the department of physics and astronomy at the University of Western Ontario. “This event was so much bigger than anything we’ve seen on video that it doesn’t surprise me the guess was off by three orders of magnitude.”

That poor estimate underscores the daunting task scientists face today: While NASA’s Near-Earth Object Program currently tracks about 10,000 objects through the heavens, there are far, far more smaller objects that are simply too tiny to track.

“If you think about objects the size of the one that came into Russia, you’re probably looking at 100 million up there. Of those likely to intersect Earth, there’s less, maybe 100,000,” said K.T. Ramesh, director of the Hopkins Extreme Materials Institute and a professor of mechanical engineering at Johns Hopkins. “Space is pretty big.”

And the size of those smaller objects — whether they’re 10 tons or 10,000 tons — makes them impossible to track with current technology, he said.

“A good analogy is finding a few pennies scattered over an acre of dirt. If you know where to look, you have no trouble seeing them. But if you just look over the whole field, your chance of finding a penny is pretty small,” Ramesh told FoxNews.com.

Of course, it’s worth noting that the incident in Russia is extremely rare and the odds of another similar event in the near-term future is pretty low. Nonetheless, we probably ought to be a little more aware of what’s out there and possibly waiting to strike us someday.