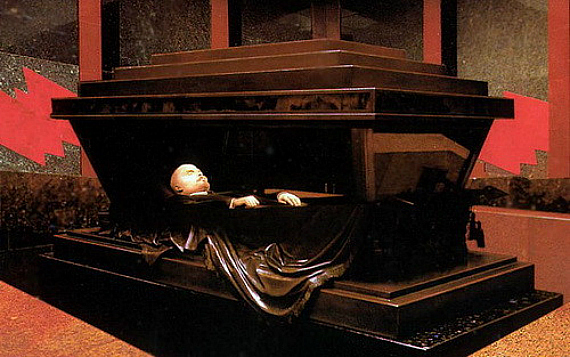 It’s been more than a decade since the Soviet Union collapsed, and longer since the Communist Party in that country lost power, and yet the body of the founder of the U.S.S.R. still lies embalmed in a mausoleum in Moscow’s Red Square where, inexplicably, tourists wander in to gaze upon the preserved body of a dead man who founded a dead nation. Now, some Russian officials are talking about removing his body and burying it in the ground:

[T]he return of Vladimir Putin for a third term as president of Russia in May, could pave the way for Lenin’s removal.

This week, Russia’s new culture minister, Vladimir Medinsky, re-ignited the controversy when he told the radio station Ekho Moskvy that Lenin should be buried.

“A body should be interred in the earth,” Medinsky said, who added that he was in favour of making it a state occasion. “I would observe all the appropriate ceremonies. As [Lenin] was a senior public figure the funeral should happen with all fitting state rituals, distinctions and a military salute in a suitable place.”

With this observation, Medinsky was drawing a comparison with the treatment of Stalin, whose embalmed corpse was spirited away from its place beside Lenin one night in 1961 on the orders of Nikita Khrushchev and buried by the Kremlin’s walls.

The famous mausoleum where Soviet leaders stood to review military parades, should stay, said Medinsky. “It must remain,” he said. “It would be possible to turn it into a museum of Soviet history that would be very well visited and could have expensive tickets.”

But the comments created such a furore that Medinsky had to clarify his position.

“It remains exclusively my personal opinion as a citizen,” the culture minister, whose appointment Putin approved last month, later wrote on his blog.

While some parts of society, including the Orthodox church, support the idea of a burial, others are vigorously opposed.

The Communist party, Russia’s second most popular political party, is particularly outspoken on the issue, which some suggest could be resolved by a referendum.

“Discussions about removal and re-burial have are simply provocative,” Gennady Zyuganov, the head of the Communist party, said in 2009. “Any attempt to vulgarise or re-write the Soviet period and diminish the memory of Lenin … is an attempt to undermine the integrity of the Russian federation.”

But many Communists are ageing and Medinsky’s comments on the subject show that support may be growing for Lenin’s final burial.

An April opinion poll suggested that 56% of Russians were in favour of removing the corpse, compared to 46% six years ago.

One suspects as the post-Soviet generation becomes older, public opinion on this issue will shift even more, and that the odd custom that began in the 1920s will finally be put to an end.