Only days after the death of Saudi Crown Prince Nayef, King Abdullah has named the country’s Defense Minister as the new Heir To The Throne:

BEIRUT, Lebanon — Saudi Arabia’s Prince Salman bin Abdulaziz al-Saud, who was governor of Riyadh for nearly 50 years until his recent promotion to Saudi Arabia’s defense minister, was officially named crown prince on Monday, making him the heir apparent to the 88-year-old King Abdullah.

The promotion of Prince Salman, 76, to Crown Prince Salman, announced via royal decree broadcast on Saudi state television, had been expected following the sudden death on Saturday of Crown Prince Nayef bin Albdulaziz al-Saud. The selection was considered a natural choice because of Prince Salman’s reputation as an austere, hard-working family disciplinarian whose tasks included controlling the special jail for princes run amok. He will keep his job as defense minister.

Despite the speedy promotions, which carried no surprises, the sudden death off Crown Prince Nayef, who was buried on Sunday, has scrambled the complicated jigsaw puzzle of family rule in Saudi Arabia, the world’s largest oil exporter. King Abdullah, though ailing, remains at the helm. While he has loosened some aspects of public dialogue, most Saudis expect only glacial change. In confronting Arab Spring ferment elsewhere in the Middle East, the Saudis successfully bought at least temporary social peace last year when they announced a $130 billion public welfare program.

“In the short run you are surrounded by revolutions all over and the Iranian threat, so the same policies will continue,” said Mahmoud Sabbagh, a young commentator. “I don’t think we will witness anything unexpected.”

Nonetheless, Crown Prince Nayef’s death brings closer the day of reckoning when the Saudis will have to figure out how to move to the third generation of princes, the grandsons of King Abdulaziz al-Saud, who founded the kingdom in 1932.

Estimates of the number of princes of the ruling clan run to more than 7,000, but critical decisions have always been tightly held among the top three or four, including the ministers of defense and the interior, who have always been sons of King Abdulaziz. Now that Prince Salman has been named crown prince, most Saudi analysts say that just two younger sons of King Abdulaziz are considered by the family to be monarch material — possessing the needed blend of shrewdness, government experience and rectitude. The roughly 10 other surviving sons are marred by ill health, a lack of ability, a whiff or worse of corruption, or a reputation for practices that violate the tenets of Islam, like drinking alcohol.

Two other potential heirs are Prince Ahmed, believed to be 71, and Prince Muqrin, in his 60s.

Prince Salman is conservative, as the majority of Saudi Arabs are. He is not locked into the past as I believe Pr Naif was, however. When he served as Governor for Riyadh – a position he held from 1954 to 2011, with a three-year break – he faced reality and dealt with it. He oversaw the growth of Riyadh from a city of 50,000 to 4.5 million. He was largely successful, though of course not everything went perfectly. Explosive growth, in both population and the economy, led to problems, including traffic and real estate conflicts, that could not have been adequately predicted.

Salman is not noted as a reformer, per se, but is certainly not an opponent to change. He’s preferred that change be orderly (it can’t, always) and within the generally accepted norms of Islam. He is noted as an opponent of corruption and abuse of power. That bodes well for the country.

With this latest adjustment in the Saudi line of succession, it becomes imperative on the Al-Saud to figure out what comes next. There are not that many sons of Abdulaziz still living and even fewer of them either want or are capable of assuming the throne. The family will have to decide, and soon, how to shift power to the next generation, the grandsons of the country’s founder. Much will depend on intrafamily alliances and who is willing to cede what to whom. With family discussions taking place behind the darkest of curtains, we likely won’t know until an official announcement is made.

One wonders how long the Saudis can keep this up. The fact that they are still being ruled by the sons of Abdulaziz, a man who did nearly 50 years ago, is rather amazing in an of itself and the fact that they’re all old men by now means that there’s the possibility for more than one of them to serve as King. Of course, it kind of helps that he had at least 22 wives and as many as 37 sons probably explains that, and why the Saudi Line Of Succession kind of resembles a puzzle drawn by a guy who’s had one to many bottles of wine. 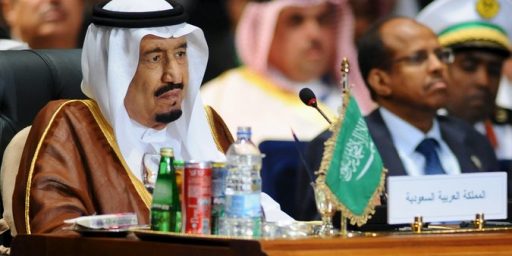